Vancouver-raised Tyler Keevil has won the Journey Prize Award of $10,000 for his story "Sealskin" which first appeared in Vol. 16, No. 2 of The New Orphic Review, published from Nelson, B.C. 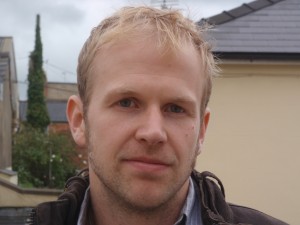 Tyler Keevil wins for "best short story by an emerging writer in a Canadian literary magazine."

The action in Sealskin takes place on the North Shore of Burrard Inlet.

Keevil’s winning story Sealskin–selected on November 5th as ‘the best short story published by an emerging writer in a Canadian literary magazine’–appears in a new short story collection, Burrard Inlet, published by Pathian Books in Wales.

It follows the protagonist Alex through his day on the waterfront, on the docks, where he’s helping to repair a fishing boat in preparation for the season to come. He has befriended a seal, whom he feeds fish to, against the rules. The owners of the dock retaliate by killing and skinning the seal, and Alex decides he’s had enough. He heads out to sea in a tug, now having donned the seal’s skin.

“What I liked about the story,” says Ernest Hekkanen, the editor of The New Orphic Review, “is the casual way it becomes mythical in the end.” Keevil has written to The New Orphic Review, thanking them for both publishing the story and for submitting it for contention for the prestigious Journey Prize.

“As you’ve probably heard,” he wrote. “I won the award last night, which was incredible, and wouldn’t have happened if you hadn’t supported the story. My acceptance speech wasn’t very planned out, but I did remember to thank you on the night as well!

“A few people out here at the ceremony [in Toronto] have said that New Orphic Review wasn’t fully on their radar, so I really hope the win also gets the magazine some exposure and attention, especially as you had two stories on the longlist this year.”

The New Orphic Review was started in the spring of 1998. Hekkanen used to bind copies himself in the basement of the townhouse he shared with his partner and fellow writer Margrith Schraner. Now, after he does the layout and cover, he sends an electronic version to Blitzprint in Calgary to be printed.

“At the The New Orphic Review, we enjoy a great range of writing,” says Hekannen. “Because we publish stories up to 15,000 words in length, we’ve created a niche for ourselves. That’s why Tyler Keevil sent us his story in the first place. The only criteria is quality. What I really like about Tyler’s story is its strength of vision, which is very palpable, even visceral.” The New Orphic Review is remarkable for its endurance, having operated without any financial assistance for sixteen years. “When there’s a financial loss,” say Hekkanen, who has written more than forty books of his own, “I make up for it out of my own pocket. We’re fiercely independent. That’s a very Finnish trait.”

The quarterly literary periodical has always presented a great range or writing, rather than any particular style. It is not hindered by political correctness or committee-made editorial decisions.

“Because we publish stories up to 15,000 words in length,” says Hekkanen, who accept entries from all over the world, “we’ve created a niche for ourselves. That’s why Tyler Keevil sent us his story in the first place. The only criterion is quality. What I really like about Tyler’s story is its strength of vision, which is very palpable, even visceral.”

Edmonton-born Tyler Keevil’s short fiction has appeared in magazines and anthologies, including Brace (Comma Press), Brittle Star, Front and Centre and New Welsh Review. He currently lives in mid-Wales with his wife and son, and teaches there.

Other stories in Burrard Inlet also emanate from the landscape. A search-and-rescue volunteer looks for a missing snowboarder on Christmas Eve; two brothers retreat to the woods to shoot a film in memory of their dead friend; a reclusive forestry worker picks up a hitcher on his way down Mount Seymour; and a young man finds a temporary haven on the ice barge where he works.

Tyler Keevil studied English at UBC and he has lived in Prague. Along the way he has worked at a variety of odd jobs in Canada and the UK: as a tree-planter in northern BC, a deckhand on an ice barge, a labourer at the Canfisco shipyards, and also in factories, bakeries, restaurants, and video stores. He now lectures in Creative Writing at the University of Gloucestershire.

His debut novel Fireball was published by Parthian Books in 2010 and was longlisted for Wales Book of the Year, shortlisted for the Guardian Not The Booker Prize, and received the Media Wales People’s Prize 2011.

His second novel,The Drive, an epic road trip adventure set in the Pacific Northwest, was published by Myriad Editions in August 2013. It has been shortlisted for the Wales Book of the Year 2014.