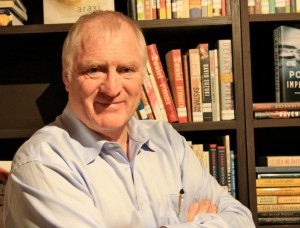 Perhaps the words of the Spanish sea captain Juan Francisco Bodega y Quadra could serve as the motto for the Association of Book Publishers of B.C.: “I sailed on. Taking fresh trouble for granted.”

This month several B.C. publishing houses were stunned by the news that HarperCollins Canada, which distributes its own books and many other publishers from its Downsview warehouse in Ontario, will be closing its Canadian distribution arm this summer.

“This is a great loss to Canadian publishing because HarperCollins did provide an excellent fulfillment service,” says Howard White, publisher for the reconstituted Douglas & McIntyre imprint. “But there will be no change until mid-2015 and in the meantime HCC will continue to handle D&M books. We will announce any new ordering arrangements in the coming months.”

“It’s shocking,” concurred Judith Plant of New Society, “but nothing surprises me anymore.”

All three of those B.C. imprints were part of the Douglas & McIntyre consortium that was re-shuffled a few years ago when D&M chairman Scott McIntyre was unable to secure one buyer. The D&M imprint was bought by Harbour Publishing; New Society reverted to its previous owners (Chris & Judith Plant); and Greystone became a separate company now owned by Rob Sanders and Rodger Touchie. All three have been thriving again.

“It’s disappointing to us,” says Sanders, “and to Harper[Collins]’s many great Canadian authors. But we will ride this out and we have a plan. For the time being it is full steam ahead with our fall 2014 and spring 2015 lists which are being distributed by HarperCollins.”

Greystone Books has just acquired World English and French rights to On the Edge: The State and Fate of the World’s Tropical Rainforests, reputedly one of the most important works on tropical rainforests in over 50 years, as well World English-language rights to More Than Honey: The Survival of Bees and the Future of Our World, based on an award-winning documentary by the same name. Filmmaker Markus Imhoof and writer Claus-Peter Lieckfeld will explore the global significance of bees, and expose human behaviors that are contributing to the worldwide bee population decline and colony collapse.

The decision within HarperCollins to close up shop in their Downsview facility was made on November 4th, apparently without much warning, catching many people by surprise, including employees at HC.

D&M and Greystone both have their own distribution facilities in B.C. and New Society does the bulk of its business in the U.S., so it’s mostly a matter of once again adapting to an ever-changing industry. Adjustments for warehousing are no cause for panic. There are optional supply chain fulfillment services such as UTP and Georgetown and FH&W. But the bigger picture now requires scrutiny as more Canadian publishing jobs in Ontario are moved south.

“The biggest Canadian publisher, Random-Penguin, has already moved its fulfillment to the U.S.,” says White. “Now the second biggest has gone also. Contrary to what most people think, fulfillment and administration (also gone south) is where most of the jobs are in publishing, so we are seeing the industry getting hollowed out. More telling, HCC has demoted its Canadian branch by eliminating the position of publisher and placing it directly under the New York publisher. It’s hard to see this as anything but a  setback for Canadian interests, for Canadian culture.”

When it comes to weathering storms, B.C. publishers have long since proven themselves as resourceful and buoyant. Whereas the Ontario publishing industry has eroded, the B.C. industry has proved itself remarkably stable. Despite the volatilities of the marketplace for books, the membership of the Association of Book Publishers of B.C. has been little-changed in ten years except for the addition of new members.