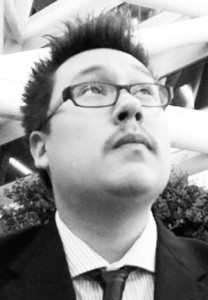 The prize money for the Griffin Poetry Prize, founded in 2000, is up to 65 grand per category. This year Alice Oswald of Devon, England, won the international category for Falling Awake.

But the big news on this side of the Rockies is that 320 guests watched Ontario-raised Jordan Abel of Vancouver, a Ph.D candidate at SFU, win the Canadian Griffin Prize on June 7 for Injun (Talonbooks). Jordan Abel, the son of a ‘settler’ mother, has been described as a Nisga’a conceptual writer who focuses on “digital humanities and indigenous poetics.” He reportedly did not come into human contact with Nisga’a people until age twenty-two. A former editor for PRISM international and Geist, he is an editor for Poetry is Dead magazine. His first book, The Place of Scraps, won the Dorothy Livesay Poetry Prize, and was followed by Un/inhabited in 2014. CBC Books named Abel one of 12 Young Writers to Watch in 2015.

It has been suggested that Abel’s books are meant to be analysed as much as, or more than, enjoyed. About Un/inhabited, he told the podcast Can’t Lit, “It is an unreadable book, for sure… I don’t think that it demands you read all of it,” he said, on “… I’m always surprised that people try to read it from front to back.” According to publicity materials: Jordan Abel’s third book of poetry, a long poem about race and racism, “destabilizes the colonial image of the Indian, both in the public domain and the western genre as a whole. By narrowing the search to the word “Injun” as it appears in the 10,000-page source text of pulp westerns, and by re-appropriating the “erasure” imposed by settler colonialism, Abel reclaims erasure, and pastiche to chisel a path through privileged, colonial histories. Injun testifies to the need for intervention by calling attention to contested issues of land ownership, territory, and the silencing of Indigenous peoples. A natural follow-up to Un/inhabited, Abel’s visual poetics bring urgency to the materiality of text by restructuring history on the site of the page.”

The Griffin judges wrote: “Jordan Abel’s collection Injun evacuates the subtexts of possession, territory, and erasure. Lyric, yes: ‘that   part   of sparkling / kn   ife love that // hates   the trouble of rope / and the   letters / of tow   ns.’ Testimony of another kind, too: ‘all misdeeds at the milk   house / all heap   shoots by the sagebrush // all the grub   is somewhere / down in the hungry bellies […]’. The fog of tedious over-dramatization clears and the open skies of discourse can be discerned. What does it mean to arrange hate to look like verse? What becomes of the ugly and meaningless? Words are restored to their constituent elements as countermovements in Abel’s hands, just as they are divested of their capacity for productive violence. The golden unity of language and its silvered overcoding erode, bringing to bear the ‘heard snatches of comment / going up from the river bank.’ To pixelize is to mobilize, not to disappear.”

Mainly Jordan Abel writes about issues for indigenous peoples, both contemporary and historical. He is fully aware his books are not easily accessible.

he heard snatches of comment
going up from the river bank

all them injuns is people first
and besides for this buckskin

dead as a horse friendship
and time to pedal their eyes

For The Place of Scraps, Jordan Abel revisited and re-examined the role of early-twentieth century ethnographer Marius Barbeau whose Pacific Northwest studies included Abel’s ancestral Nisga’a Nation. Publicity materials state: “Barbeau, in keeping with the popular thinking of the time, believed First Nations cultures were about to disappear completely, and that it was up to him to preserve what was left of these dying cultures while he could. Unfortunately, his methods of preserving First Nations cultures included purchasing totem poles and potlatch items from struggling communities in order to sell them to museums. While Barbeau strove to protect First Nations cultures from vanishing, he ended up playing an active role in dismantling the very same cultures he tried to save.”

Jordan’s second poetry project, Un/inhabited (Co-published Project Space Press and Talonbooks 2014) investigates public domain to create an analysis of the interconnections between language and land. Abel constructed the book’s source text by compiling 91 complete western novels found on the website Project Gutenberg, an online archive of public domain works. Using his word processor’s Ctrl-F function, he then searched the document in its totality for words that relate to the political and social aspects of land, territory and ownership. Each search query represents a study in context (How was this word deployed? What surrounded it? What is left over once that word is removed?) that accumulates toward a representation of the public domain as a discoverable and inhabitable body of land. This poetry collection also includes a text by independent curator Kathleen Ritter—the first piece of scholarship on Abel’s work.

“In parsing sentences of the colonial habitus that drives Old Westerns, Jordan Abel’s Injun turns tables of (dis)contents to redress the page, the book, and the naturality of reading. The poems build an alphabet and a numeracy, unfurl lexical ribbons of mourning that explode sentences forward and back, and then insist we recognize a vitally inhabited void. With his caress of phrases cruel with racisms, Abel deftly shows that where the social psychosis of West was founded, it also flounders, and on one word: injun with its echoes of injunction, injustice, injury, inject. This is brilliant work.” — Erin Moure

“Through word patterning and word breakdown, Jordan Abel shuffles up the English language in his probing of the use of the word ‘injun’ in public domain western novels. At once, his work creates a poetics of anti-colonial space and consciousness—a space where a new and vibrant Indigenous poetic consciousness can emerge. He is one of the most exciting and innovative Indigenous poets of our time.” — Neal McLeod

“I’m drawn to the fugitive nature of Injun. I imagine Abel poring over source texts, deconstructing code, forging meaning from scraps and breaking through colonial constructions with fever, and I can’t help but think he’s re-created my experience of being Indigenous in Canada. Well done.” — Leanne Simpson

“Built from a core sample of our culture’s colonialist project in language, Jordan Abel has opened a space of disruption, lament, resistance, and inquiry—a terrible, inverted singing that can undermine assumption, exposing ‘soft’ ideology. Injun isn’t a record of past wrongs, but a present tense intervention. A necessary, confrontational beauty. The country needs Injun right up in its face.” — Ken Babstock