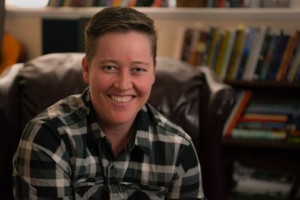 “Being a girl was something that never really happened for me,” says Rae Spoon, co-author of Gender Failure (Arsenal 2014), along with Ivan E. Coyote (above).

Rae Spoon’s comment sounds like a clever thing to say to grab attention. But one need only dip into any page of this mutual tell-all  to understand how that statement has been true for both these writer-performers who have moved toward maleness in female bodies. One of the stories in the book is Coyote’s straight-forward, sometimes amusing, yet difficult-to-share account of having her breasts surgically removed is a breakthrough in candour even for Coyote. This is clear, honest and wisely non-propagandist reportage from the front lines of an ongoing battle to bring transgenderism into mainstream awareness.

In her books, Coyote is smart enough to eschew didacticism. Meanwhile Coyote and Spoon know full well how much leadership is entailed in their work, how much their work matters to the LGBT sector of society. For Coyote to continually walk the line between educator and entertainer with such an endearing, saucy and provocative intelligence—smartly retaining her loyalty to an earnest and effective B.C. publisher—reaffirms her position as one of the most important literary artists in Canada.

Reprinted with permission from Gender Failure by Rae Spoon and Ivan E. Coyote (Arsenal Pulp Press, $17.95), the following is a candid account of preparing for cosmetic surgery.

I was so nervous, the secretary at the reception desk looked at me with softening eyes and told me everything was going to be okay. I had barely spoken to her, but it was just that obvious, I guess.

First of all, it didn’t feel like there was any possible way this could really be happening. Nineteen years of binding my breasts, even more years trying not to hate them, a psychologist’s appointment, a psychiatrist’s appointment, a psychological assessment, two doctor’s appointments, several letters back and forth between doctors and shrinks and bureaucrats, phone calls, more phone calls, twenty months since I had actually cranked the whole machine into gear, and here I was. Meeting the surgeon. He was fourteen minutes late. But who was counting?

He was handsome and tanned in January, and his assistant was tall, blonde, and wearing grey leather stiletto boots. Looked pretty much like what I thought a cosmetic surgeon and his assistant would look like, not that I had ever spent much time wondering. I have to fill out forms, of course, no I don’t smoke or have hemophilia, and no, my religion does not forbid me to have a blood transfusion. The letterhead on the forms is for a cosmetic surgery clinic. I am reminded that most people think that is what this is. Elective. Cosmetic. Unnecessary. My period is due today. My tits are at their biggest, and most tender. I can feel the binder pinching under my arms where it does. Turns out the doctor and I both studied music at a small community college together in the late eighties. I do not remember him, and he would not recognize me. I ask him if he studied jazz piano just in case this whole cosmetic surgeon thing didn’t work out for him, you know, so he had something to fall back on. I make jokes like that sometimes when I am nervous.

He asks me a lot of questions. Why am I not on testosterone? Do I intend to go on testosterone in the future? What do I want my chest to look like when he is done? Do I care more about what my chest looks like, or whether or not I will be able to feel my nipples afterwards? I tell him a little of both. This surprises him. He tells me it is mostly only women who care about nipple sensation after surgery, and that most trans men only care that they have a masculine appearing chest after. He looks at his assistant, is she getting all of this down? And she nods back just a little, yes, she is.

Throughout this entire bureaucratic maze, I have wanted to not like the doctors, the psychiatrist, the surgeon. The gatekeepers. I have been waiting for one of them to be callous, or say something phobic or use the wrong pronoun, or write the wrong thing down on the wrong form. But everyone has been so … nice. Even though I still care about whether or not I can feel my nipples afterwards. I never quite feel like they truly understand me, but that doesn’t seem to get in the way of them completing the task at hand.

I have to strip my upper body and put on a blue gown. The surgeon measures my chest extensively. I haven’t worn a typical woman’s bra in my entire life, and I don’t mean there is any such thing as a typical woman, let me be clear, what I mean is a bra-type article of clothing typically worn by a woman, anyway, I have never owned or worn one, ever since I was nineteen or so and they finally appeared on the scene uninvited, I have always tried to mash them down, disappear them, never lift and separate, so I actually have no idea how big they really are. Turns out I have a forty-two-inch chest, a number that seems surreal to me, nearly impossible. I explain to the surgeon that they didn’t used to be this big, just since I hit my forties, my body is changing, and if he performed double hipectomies I would be signing up for that, too. He is calling out measurements and observations to his assistant. My breast tissue is dense and firm, he states. She scribbles on her notepad. My nipples are big and will have to be removed completely from my body and resized and grafted back onto me. He remarks that my breasts exhibit very little ptosis, which is a medical term for sagging. This makes me feel oddly proud, considering I am here to have them removed. Kind of like waxing up your car so you can take it to the wrecker, or petting a puppy before you leave it out in the cold. Which, for the record, I would never do. I love puppies. But even talking aloud about it all felt kind of like that for me, like I was closing a door on a room I really loved, only because it was the one way I knew to keep going.

He pulls out a blue Sharpie and makes several marks on my chest, then stands back and surveys them. Like you would if you were trying to hang a picture level on a wall. Then he takes a camera out, snaps several pictures of me from the neck down, and then puts it away.

He explains to me that I will need a double incision/bi-lateral mastectomy, and that my nipples will be rendered insensate. He delivers this news deadpan, like he’s has had a lot of practice saying these words without any affectation or emotion whatsoever. Insensate. I looked it up after, later, when I got home. It has two meanings: 1: lacking physical sensation. And 2: lacking sympathy or compassion, unfeeling.

The surgeon narrows his eyes at my copious chest hair. “You have never taken testosterone?” he asks me again. I shake my head, no. “Well, there is something going on for you here, then,” he tells me.

“Positive thinking,” I tell him, and he smiles, like this can’t be true, even though I am pretty sure it is.

He measures my nipples from tip to tip, lets out a low whistle. “Wow,” he says, sounding impressed. “Thirteen inches.” His assistant raises her head, looks over at us, writes it down. I have no idea what this means, whether this number is impressive because it is so small, or so big.

“Yep,” I state. “That’s right. Thirteen inches, uncut.” We all crack up. My nipples are standing on their tiptoes now, maybe from the cool air in the examination room, maybe from brushing up against the measuring tape, maybe from fear. Hard to say.

The next morning, I looked long at myself in the mirror. Tried to imagine my new chest. Touched my exquisitely sensitive nipples. Imagined them small, and dull to touch, and stitched back on. I have done this a million times before. But this time there were two blue marks, in the soft crease there, dead centre below my nipples. I had scrubbed and scrubbed at them in the shower, but they wouldn’t come off, they had hardly even faded. The ink the surgeon had used had been very, very permanent.