It Begins in Betrayal 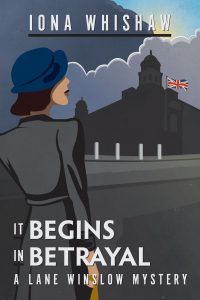 In Iona Whishaw’s fourth mystery, It Begins in Betrayal (Touchwood $16.95), it’s been four years since Flight Lieutenant Darling and his crew were shot out of the sky, crash landing their Lancaster in a field behind enemy lines in occupied France. A British government official comes to King’s Cove, near Nelson, B.C., and summons Darling to London for further questioning about the air crash. He’s arrested and charged with murder. Whishaw’s 1940s sleuth Lane Winslow proceeds to London to save the man she loves.

Iona Whishaw’s debut murder mystery, Dead in the Water (Friesen 2015), was republished as A Killer in King’s Cove (Touchwood 2016), the first in a series featuring her 1940s heroine Lane Winslow who relocates from England to B.C. in 1946 after her lover, a pilot, was killed during WW II. In a tiny, idyllic community near Nelson, B.C., called King’s Cove, populated by older British émigrés from before WW I, the young British ex-secret service agent Lane Winslow looks to put the war and her sorrow behind her, only to be arrested after she and her neighbour discover a corpse in the creek that serves as her water supply. The identified body only carries her name. At first Lane Winslow tries to help Inspector Darling and Constable Ames solve the mystery but Darling becomes suspicious of her as a suspect. Burdened by the requirements of the Official Secrets Act, she is unable to fully clear herself as the real killer remains on the loose.

Whishaw’s grandfather was a spy in both World Wars but her heroine is inspired by her extraordinary mother who was a sophisticated risk-taker. “She cut a swath through life that was completely independent,” Whishaw writes on her blog. “It was she who put my father through university, and bought our first houses.

” When we were children she hitchhiked to Alaska with interstate truckers because she was tired of waiting around for my father to come back from geology field trips, and in the same devil-may-care spirit drove me and our German shepherd all the way to Nicaragua to find him, long before the highway through Central America was even complete. She wrote books and spoke six languages, and went off to university to get four Master’s degrees after I grew up and left for university. And of course, there was that brief episode of spying during the war in South Africa where my father was a pilot for the RAF.”

A former high school principal and a graduate of the Creative Writing Master’s program at UBC, Iona Whishaw has also published a children’s book, Henry and the Cow Problem.

Death in a Darkening Mist