The tradition of printers supporting the literary arts is a very long one.

Before there were trade publishing companies in British Columbia, the two major progenitors for books made in the province were Morriss Printing in Victoria and Mitchell Press in Vancouver.

Mitchell Press still exists, although their headquarters is no longer situated in Vancouver. They are not known for producing books.

Morriss Printing became the owner of Sono Nis Press, one the pioneering literary imprints in Western Canada. Eventually the printing operation was sold and went out of business, but Sono Nis Press, eventually owned by third-generation publisher Diane Morris of Winlaw, B.C., remained as an active imprint for five decades.

Byron Sheardown, of Web Express Printing, has been publishing magazines since age eighteen. Since 2004, he has published—completely unfunded—a national poetry magazine called Quills Canadian Poetry that has included works by distinguished writers such as George McWhirter, Lionel Kearns, Daniela Elza, John B. Lee and Bernice Lever.

Unaffiliated with any university or organization, Quills Canadian Poetry exclusively publishes Canadian poets and is distributed across Canada—as a physical product, artfully designed—through large and small bookstores via Disticor, out of Toronto.

ORMSBY: Do you ever stop and think that publishing a literary magazine in Canada without a drop of public funding is a bit like Van Gogh selling only one painting during his lifetime? And maybe you are bit mad?

SHEARDOWN: I suppose being a little bit crazy helps. I crave a little bit of crazy in my life. But, basically, I think to be a poet or a publisher you’ve got to have a great passion. I simply love poetry. That was the rationale I stated in the only editorial I ever wrote, in the first issue. It hasn’t changed.

ORMSBY: Naming a publication is a bit like naming a child. How did you decide on Quills?

SHEARDOWN: I’m a printer by trade. I’m attracted to old periods in history. I like to know how things used to be done, how things are made, whether it’s printing or writing. I researched how they made pens in the old days and the quill business was fascinating. A good quill maker could pump out a few hundred a day! The image of a poet bent over a desk feverishly writing was an image I wanted to invoke. When I started, I wasn’t even aware of Quill and Quire, the trade publishing magazine. I used to subscribe to POETRY magazine out of the U.S. and I loved it. I couldn’t find a Canadian equivalent so I figured I’d start one myself.

ORMSBY: Do you feel a paternalist pleasure fostering the writers; or would you say your approach has been more fraternal? 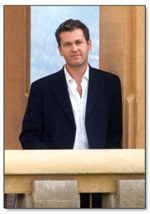 SHEARDOWN: I would never feel paternalistic over any author. It’s definitely a fraternal fostering. I get a great pleasure providing a place for these poets.

ORMSBY: So, when you receive a particularly fine submission from a writer, is your inclination to get to know them? Or do you generally prefer to remain at a distance?

ORMSBY: When you were growing up, at what point did you begin to realize that in some way your life would have to entail some sort of literary pursuit?

SHEARDOWN: When I was coming of age I realized, through movies and books, that women seemed to like this poetry. So, if poetry could attract a woman’s attention, it seemed like it was a smart idea to take some interest in writing. I started to write and deliver little notes to my crushes. The many successes, of course, have lead me to publishing Quills for 14 years! [Laughter].

ORMSBY: Were there any particular writers or books that inspired you?

SHEARDOWN: Shakespeare, Lord Byron, Dylan Thomas. They were the traditional influences. But there was also a poet in the Yukon named PJ Johnson—not to be confused with Pauline Johnson. She was the Poet Laureate for Yukon at one time. She really got me to explore poetry and encouraged me. From her, I discovered a poetry thread deep inside me.

ORMSBY: So, now you’ve had decades to think about it—what are the psychological origins for your love of literature?

SHEARDOWN: Ha! I’ve tried to avoid thinking about it up to now! I think it comes down to relationships with women. I guess it’s a primal need that inspires the poetic method. Not being inclined to excel at athletics, that meant picking up a pen.

ORMSBY: When you are introduced to a stranger, and they ask you what you do, what is your usual answer? 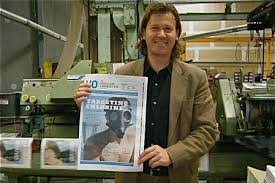 SHEARDOWN: I’d be embarrassed to say I publish poetry. It generally evokes an awkward, turn-to-glass stare. I have found it’s a lot easier not to mention it. I always say I’m a printer. If the stranger gives some hint that he or she is a writer, or someone who likes poetry, I might open up and start blabbing about Quills.

ORMSBY: If you were in Ontario, you could likely get gobs of money from the Ontario Arts Council. Have you ever had any dealings with the B.C. Arts Council?

SHEARDOWN. No. But, hey, I’m moving to Ontario right now. I think way back when, when I started Quills, I might have investigated funding. You learned pretty quickly those official funding agencies can be a bit like a fortress. Once upon a time, maybe in the Seventies or Eighties, they probably weren’t like that. They probably wanted to let you in. They even put down the drawbridge. But nowadays I get the sense they are making it more and more difficult for any newcomer to navigate entry. I wouldn’t go so far to say it’s Trumpian. It’s just supply and demand. I am not at all opposed to public support for the arts. It’s essential. Especially when we live next door to the world’s largest economy. I would love to finally get some support for Quills. It deserves to have far more people know about it.

ORMSBY: After fourteen years, you are hardly a newcomer. Maybe the Canada Council would let down their drawbridge?

SHEARDOWN: Because I actually distribute Quills across the country, I did apply once for the publications mailing grant. And I got it. But because I didn’t want to apply for all the other stuff, and their publications mailing grant was so tiny, I tried to give it back. It caused a problem for them. They said they had no mechanism for returning a grant as no one had ever done that before. It was bizarre. It didn’t take long to decide that funding Quills on my own was actually far less stress.

ORMSBY: Considering the time and dedication that’s involved, maintaining a literary magazine is bit like having a mistress. How has your life partner responded over the years?

SHEARDOWN: I’ve got an amazing wife who supports absolutely all my craziness. She even supports my annual trip to Burning Man. Now that’s love. Meanwhile I love Quills, too. It’s another long-term relationship. Long-term relationships are like the rivers we swim in to get through life. I cherish both my rivers. 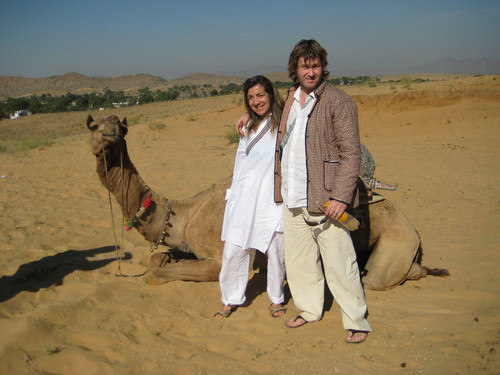