Indiana Jane and the Electric Samurai 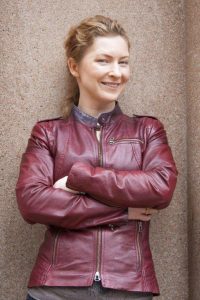 Kristi Charish adds a third title to her “Owl” fantasy series, about the ongoing adventures of a girl who is an antiquities thief – a modern day Indiana Jane navigating a hidden supernatural world. Owl and the Electric Samurai (Gallery $18) follows Alix Hiboux, better known as Owl, as she seeks to save two game designers upon whom the International Archaeology Association (IAA) has opened a bounty. The designers are important because they built Owl’s favourite role-playing game, World Quest. She needs to find the notorious gaming duo before other IAA mercenaries do. But the game designers won’t be easily found since every clue suggests they’re hiding out in the legendary lost city of Shangri-La. To complicate things, the supernatural community is in turmoil when ancient alliances break down and struggles for power erupt. Owl and her friends are dragged into a deadly game of wits with an opponent who calls himself the Electric Samurai. The cost of losing is an all-out civil war between two powerful supernatural factions. Ancient cities, ruthless mercenaries, and feuding supernatural armies? Just another day on the job for Owl. In addition to her Owl series, Vancouver-based Kristi Charish also launched a new urban fantasy series with The Voodoo Killings (Vintage Canada 2016) introducing the character Kincaid Strange, a voodoo practitioner. She studied archaeology and zoology, achieving her BSc and MSc from Simon Fraser University in molecular biology and biochemistry; and a PhD in Zoology at the University of British Columbia. She has worked as a scientific adviser for fantasy and science fiction writer Diana Rowland and is co-host of the Adventures in Sci-Fi Publishing Podcast. 978-1-50113-973-4