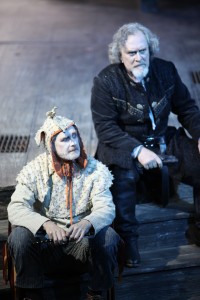 Co-productions look good on paper. They are favoured by granting agencies, buy more about accountants and producers.

For actors, however, look the ethics of one-for-all-and-all-for-one generally produce better results than the mathematics of two-for-the-price-of-one.

After a winter run at Theatre Calgary, director Dennis Garnhum’s remounting of King Lear for Bard on the Beach should be cohesive, with verve and clarity, with unblemished choreography, and one would assume an opening night audience would easily accord the customary standing ovation, suitably sympathetic to Benedict Campbell’s brave effort to match, emulate or out-do his father’s performance as the bereaved, raving, geriatric and forsaken monarch on the heath.

But the staging is often clunky, especially the fight scenes and numerous stabbings. The decision to have innumerable entrances and exits via the house doesn’t assist the audience in gaining the illusion of entering into a foreign, theatrical landscape.

After about twenty minutes we know for certain this is going to be a presentable Lear, not a memorable one.

Perhaps there is an innate gentility or decency to Campbell’s demeanor that makes his bombast seemed forced, but he is never convincing as a madman. We don’t monitor a progressive descent into derangement. As one of his daughters suggests, he got old, but he didn’t get wise. There is no arc for his estrangement. It’s brisk and brusk.

As even people who have never seen the play can tell you, the king’s mania is primarily motivated by his resentment towards his two ‘pernicious’ daughters who have royally screwed him around. But here the ‘elder abuse’ angle is simplified. Goneril is one-note—obdurately cold to her father—and Regan is similarly directed to be one-note—shrill with a vehemence that makes us think of Lady Macbeth. The raw dissembling of a family is presented as a done deal from the first scene.

There are some exchanges between Scott Bellis as the jester/fool and Campbell’s Lear that galvanize our attention—and make the audience aware of what could be happening on stage. Similarly, the scene in which Gloucester gets his eyes poked out is riveting and visceral in a way that briefly injects electricity into the crowd and makes us realize, simultaneously, that much of the action is flaccid.

The cast is not universally audible. Much of the verbiage is dispensed in a rudimentary fashion as everyone scrambles up and down the monkey bars of Pam Johnson’s Jungle Jim castle set. After three hours or so, we simply get tired of leaning into this production to hear what the heck some of these actors are trying to say.

When David Marr as Gloucester becomes eyeless, and he hopelessly wants to kill himself while stumbling towards his Mecca of Dover, his laudable performance as the pitiful, abused and pain-addled friend of Lear suddenly seems on par with the strength of Campbell’s purblind meanderings. This, too, is a tad troubling. Our empathy for Lear should make us feel deeply; instead we mostly just watch.

It doesn’t help that we’re in a tent through which we can see a gorgeous summer evening. Everyone is in shirt sleeves. There, behind the castles, is the glorious panorama of an idyllic sunset. For a comedy, okay. The ‘playground’ outside the Planetarium is a delight. But given this real life setting, it’s gonna take a helluva lot more than a smoke machine and a soundtrack to convince us that Benedict Campbell is being pummelled by a rainstorm in a wild, godforsaken landscape.

King Lear invites us to enter deeply existential territory. It’s not just Lear who has been wronged. The play is rife with evil and gore. It reveals with disturbing horror how the veneer of civilization can easily disappear. You, too, could end up sleeping beneath a bridge. But beneath beautiful, co-produced skies, Lear’s dread remains on the stage and Shakespeare only feels like a dose of medicine.

[photo of Scott Bellis and Benedict Campbell by David Blue]