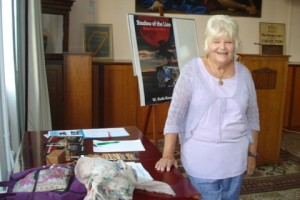 At age eighty, travel writer W. Ruth Kozak of Vancouver has published her first novel, Shadow of the Lion: Blood on the Moon (Bristol: Mediaaria CDM 2014), set in Greece during the aftermath of the death of Alexander the Great in 323 BC when there was a power struggle among his followers. Her planned follow-up volume will be Blood on the Moon: The Field of Hades. Following her attendance at a historical writers’ conference in London, Kozak was invited to several author events in Greece, a country she has often visited. A Vancouver resident since 1946, Kozak was raised in East Vancouver where her father, the Reverend Fred Filer, was pastor of the Grandview Baptist Church. She attended Templeton and Britannia High Schools. Her first job was in the newsroom of the Vancouver Sun. She has published in The Province, The Vancouver Sun, 50 Plus, Senior Living and other newspapers and magazines as well as on-line publications www.EuropeUpClose.com and www.travelgeneration.com. Her own on-line travel zine is at www.travelthruhistory.com where she describes a trip to Egypt. One of her projects is an Athens Guide e-book for Hunter Publishing, US.

4 Responses to “In Alexander’s wake”