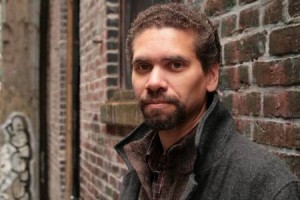 After a one-year stint at the Vancouver Public Library’s seventh writer-in-residence in 2011, Wayde Compton took over from Betsy Warland as the director of Simon Fraser University’s Writers Studio in 2012 and later released his first collection of short stories, The Other Harbour (Arsenal Pulp 2014). It has received the $300 City of Vancouver Book Award from a field of finalists that included the illustrated kids’ book Mr. Got to Go, Where Are You? by Lois Simmie and Cynthia Nugent, a local history entitled Live at the Commodore by Aaron Chapman, and Bren Simmers’s poetry collection Hastings-Sunrise. In 2002, Wayde Compton instigated the Hogan’s Alley Memorial Project, with a goal to preserving the public memory of Vancouver’s original black neighbourhood. Hogan’s Alley was the informal name given to Park Lane, an alley running through the southwestern corner of Strathcona in Vancouver’s East End. [Photo by Ayelet Tsabari]