It may look like some other planet's space junk. 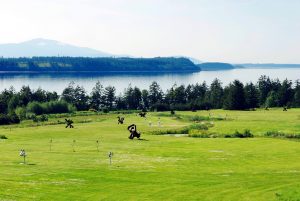 "Rubinoff was aware of the fearful pall cast over his lifetime by the arms race." -- Catherine Nutting.

But Jeffrey Rubinoff’s Sculpture Park on Hornby Island has nothing to do with NASA and more to do with Charles Darwin and Dr. Strangelove.

REVIEW: The Art of Jeffrey Rubinoff Critic Maria Tippett suggests that Jeffrey Rubinoff, who was born in London, Ontario in 1945 and died in January of this year, likely purchased a farm on Hornby for his modernist steel sculptures in order to emulate his artistic idol, David Smith. — Ed.

The Art of Jeffrey Rubinoff concerns Rubinoff’s sculpture, the park on Hornby Island he shaped as a permanent sculptural exhibit and his conviction that the process of art-making amounts to an important form of enquiry.

Rubinoff welded and cast in steel. His raw material was commercial steel, both COR-TEN and stainless. Aside from his early works, which are largely absent from the book, his oeuvre comprises nine series of sculptures.

Series 1 and Series 2, from 1982 and 1983, are in stainless steel, with the former made up of rectangular shapes and the latter looking more like oversized tools. Series 3 contains welded T-bars and bent tweezer-like shapes; and the thin sheets of rusted COR-TEN have been compared to linear drawing. Series 4 expands on the complicatedness of previous work, and its angular construction and placement give it a machine aesthetic.

Series 6 through Series 8, made in the 1990s and early 2000s, contain biomorphic shapes constructed in Rubinoff’s two chosen steels, sometimes combined. The sculptures in Series 9 are complicated conjunctions that seem to move almost anthropomorphically.

This edited volume, made up of twelve chapters in three sections, begins with James Fox’s detailed introduction. He describes the genesis of the book from his first attendance at a conference in the Rubinoff Sculpture Park. The book’s chapters are thematic, and do not take a directly chronological approach to Rubinoff’s works.

The book relies heavily on Rubinoff’s own writings, including statements made by him via email with the authors before his death in January 2017. Fox discusses Rubinoff’s history of selling and exhibiting and his decision to permanently house his sculpture on a 200-acre farm on Hornby Island that he bought in 1973. The editor relates each of the Series to Rubinoff’s ethical, political, and philosophical concerns.

The opening chapter discusses the relevance of place to Rubinoff’s sculpture, a subject that Barry Phipps frames through the ancient concept of the vita activa / vita contemplativa. The sculptor’s studio is the property’s old barn. Barns are inherently transitional between indoors and outdoors, since they are built to house animals and to allow airflow. Rubinoff felt the effects of weather while working in his barn studio, and his sculptures, once placed outdoors, were further worked on by weather, rust, and beautiful lichens.

Rubinoff’s assistant told Phipps that siting sculptures, which meant setting them into the coastal farm landscape, was a creative experience that involved the use of heavy machinery and required the reshaping of artificial hills and natural waterways. Rubinoff with an early steel sculpture.

Chapter Two presents Rubinoff’s Park as a radical example of removing sculpture from the art market. In some ways, metal itself can be inherently liminal — metals exist naturally in diverse sources, in wood, earth, and water. But also, as James Purdhon explains, the properties of the raw materials themselves determine or delimit the forms that steel sculpture can take. Purdhon argues that the qualities of the material inherently reference the history of its industrial production, lending agency to the steel in the artistic process of creating sculpture.

Rubinoff struggled against steel’s intransigent power to produce random results, leading him to situate art not in the final product but in the ongoing learning process of art making. In the next chapter, Alistair Rider pursues the theme of the positive unpredictability that characterizes not only art making but also art viewing. Rubinoff’s writings identify art making with the act of witnessing. His lifetime – he was born in 1945 – coincided with the inhuman use of nuclear weapons at the end of World War Two and spanned the global arms race and the stockpiling of weapons of mass destruction.

Rubinoff’s off-balance, awkwardly placed pieces look like “modern hardware” and bespeak his interest in the human scale that contrasts with the powers that are “capable of erasing it.” Rider relates this to the relational aspect of viewer subjectivity, where art draws attention to the processes of viewership and seeing.

The final contribution to this section treats the methods used in Rubinoff’s early work, his artistic training, his debt to European Modernism, and his 1970s work in property development. It is the strength of steel that makes it a valuable commodity in the military-industrial complex, but by focussing on its strength, Rubinoff makes it a metaphor for human vulnerability and anxiety. Joan Pachner examines Rubinoff’s commitment to abstraction, his Series 1 references to David Smith’s Cubi, and the debt of Series 2 to Rubinoff’s experience in construction work. In Chapter Five, James Fox identifies Series 3 as the best of Rubinoff’s work, arguing that the sculptures are both abstract and “profoundly pictorial.” Industrially produced in flat rectangular plates, suiting sculpture that exemplifies plane and line, COR-TEN also lends itself to being beautifully rusted and weathered. Rubinoff believed that the pieces of a series grew, like evolutionary progress, out of the reality of earlier works.

Fox highlights this theme of “becoming” by stressing the time and action inherent in the creative processes, and by contrasting the appearance of lethargy and slippage in the sculpture’s placement with the kinetic force stored in the welded shapes.

Next is Mark Breeze, “From Non-Places to Non-Architecture,” a chapter that explores how the Sculpture Park was influenced by Rubinoff’s work on construction projects, particularly his youthful involvement in the building of hotels and malls. The chapter title refers to Mark Angé’s work on urban “non-relational” spaces — spaces of consumer capitalism, like malls — that render an individual anonymous and socially alienated.

When Rubinoff returned to his hometown (London, Ontario) after completing his studies, his father gave him a shopping mall, or rather the land and wherewithal to build one. Breeze contrasts the nature of hotel and mall spaces, which are linear, efficient, and conveyor-belt-like, with the Sculpture Park’s use of berms, swales, and modified creekways to blur the distinctions of nature, farm, and park, and to disrupt the viewer’s passage. In Chapter Seven, Tom Stammers explores Rubinoff’s stated debt to German Idealist thinkers including Kant, Schelling, and Hegel. These are related, in Stammers’s view, to Rubinoff’s focus on forms, his interest in the viewer’s temporal passage, and his belief that the artistic practice can reveal new truths. An artist can be a knowledge producer who repeatedly ventures into uncharted territory, discovering through her art new knowledge about herself, human nature, and nature.

Rubinoff thought of his sculpture series in evolutionary terms, where each work was a proposition and where no specific outcomes were preconceived.

These themes of machine-age capitalism and Darwinian natural selection are brought together in Chapter Eight. Alexander Massouras argues that art cannot be cut off from an artist’s experience in culture or in capitalism, and that the very process of Rubinoff’s work with steel is “loaded with traces of construction,” resulting in the “machine aesthetic” of his sculptures. Massouras sees Rubinoff’s interest in Darwinism in the “strongly evolutionary connotations” of the sculptures’ numeric titles and their sequential groupings within the Park.

Rubinoff was acutely conscious that his efforts at artistic evolution were occurring within the span of the nuclear endgame. His preoccupation with nuclear war and the consequent apocalyptic nuclear winter, or “end of the age of agriculture,” can make his Sculpture Park seem a ruinscape.

But the Park also references flux, contingency, and the passing of time.

David Lawless’s chapter ushers in the final section of the book. When Rubinoff read about the Burgess Shale fossils, he returned in Series 6 to making biomorphic shapes. His fascination with evolution rendered Darwin’s book ever-present. Indeed Rubinoff called On the Origin of Species his “handbook for creativity.” Lawless finds parallels with Darwinian theory in Rubinoff’s artistic outlook, specifically his belief that the inheritable traits of perception and spatial acuity determine the shape and placement of sculptures.

This and the following chapter by Maria Tippett raise the question of whether Rubinoff’s modernist steel sculpture becomes eclipsed by its placement within the natural grandeur of coastal mountains and islands.

Of the Sculpture Park’s location on semi-forested farmland abutting an extension of the Pacific Ocean (the Salish Sea), entirely encircled by the Coast Mountains and the Beaufort Range of the Vancouver Island mountains, Rubinoff once observed, “This is a crushing environment for sculpture because it is so sculptural itself.” Lawless characterizes the Sculpture Park itself as a protected eco-region that can contribute to British Columbia ecology.

Next up is Tippett, who argues that the Hornby Island sculpture, juxtaposed to the spectacle of nature, amounts to a challenge to questions of nature vs. sculpture. Tippett discusses the state of art education and sculptural work in eastern North America in the 1960s when Rubinoff studied and exhibited, and she links the purchase of the Hornby Island Farm to a similar acquisition by Rubinoff’s artistic idol, David Smith.

Chapter Eleven asks whether Rubinoff’s Jewish heritage touches his identity as an artist. Aaron Rosen demonstrates that Rubinoff, although influenced by Barnett Newman, David Smith, and Anthony Caro, eschewed the label “Jewish artist,” as had members of the New York School. Rubinoff believed in art’s universal and spiritual aspects and in its capacity to illuminate the human condition, ideas born out of Wassily Kandinsky’s 1911 On the Spiritual in Art.

Yet Rosen shows that Rubinoff, engrossed with living “in the shadow of the endgame,” looked not to a utopian future, but rather to origins, genomes, and the prelapsarian past.

This search for origins excited Rubinoff’s creativity and supported his desire for evolving self-discovery.

Rubinoff was aware of the fearful pall cast over his lifetime by the arms race, and in the final chapter of the book Peter Clarke considers the effects of this by carefully studying a short aphorism by Rubinoff on art, creativity, war, and existence. In the 1960s Rubinoff participated in leftist subculture, anti-war but not otherwise overtly political.

Clarke relates Rubinoff’s sense of artistic identity to his belief that artistic production must address the realities of one’s time. For Rubinoff these realities include the entrenchment of the military industrial complex, the massive stockpiling of nuclear and other weapons of mass destruction, and the sad fact that ordinary citizens are denied access to decision-making on these issues. How could the sculptor respond? Rubinoff’s response was to assert the capacity of the ethical artist to witness current reality and to use his art practice to access new knowledge.

The Art of Jeffrey Rubinoff is illustrated with careful photographs of the sculptor’s works. It would have benefitted from more of them. These beautiful images attend to the surface details of the steel; they show Rubinoff’s burnish marks as well as the effects of natural processes, including rust and the growth of colourful lichens and mosses.

The steel sculptures, framed by the greens, blues, and warm beiges of the natural habitat that surrounds them, invite the reader to Hornby Island to see the Sculpture Park for herself. Catherine Nutting is an art historian whose interests range from interculturalism to philosophy, theory, and contextual historicism, among many other topics. She teaches at the University of Victoria and the Vancouver Island School of Art in World Arts, Modern Art, Renaissance, Baroque, Popular Culture, Canadian Art, and other Fine Arts courses. She is currently researching the seventeenth century, particularly networks of knowledge, in light of which she broadens the already multivalent concept of the early modern household to include that of a scholarly environment. She is also a visual artist who works in acrylic and watercolour painting, paper collage, and word/image explorations, many of which draw inspiration from the natural world.