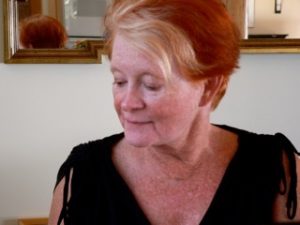 Leslie Hall Pinder’s fourth novel, The Indulgence (Self-published / Tellwell $19.99), is another courtroom drama arising from her twenty-eight years as a courtroom lawyer. Whereas Pinder’s first three novels involved First Nations–land claims and culture–this time the protagonist ends up in court after falling in love with someone who can’t give love in return.

Famous actor Lucinda Yates comes to regret her torrid love affair with the beautiful journalist Eva Ryder. Returning home to Canada, glad to be out of a “toxic obsessive relationship,” she is frightened and appalled to be charged with criminal abduction of Eva’s teenage daughter.

The Indulgence arose from a small dinner party Hall Pinder attended. One of the guests was a judge she greatly admired who was trying a case wherein a father was charged with the abduction of his own daughter. “The judge was deeply troubled by the case,” she has recalled. “I asked him if he would be okay with my attending the trial. I then spent the next few weeks watching the case. It became the foundation for the novel.”

For promotional purposes, British actor Juliet Stevenson agreed to be filmed reading the chapter in The Indulgence during which the actor-protagonist Lucinda attends her first bullfight. “She projects her troubled relationship with Eva Ryder on to the fight. Watching Juliet do that, watching her take my words and Lucinda’s crazy projection, and give them wings, has been my proudest and most glorious experience as a writer,” she says.

Born in Saskatchewan in 1948, Leslie Joyce Hall Pinder (née Hall) earned a B.A. in English Literature from the University of Saskatchewan and graduated from Dalhousie University in Halifax in 1968. She worked as a court recorder in Vancouver before pursuing legal studies at UBC.

After being called to the bar in 1977, she joined a prestigious Vancouver law firm as its first female litigator. The firm held its monthly meetings at a club that did not admit women. When she was asked to use the servants’ entrance, she walked through the front door and into a lot of trouble. Her employment ended.

In 1978 she worked for the Union of B.C. Indian Chiefs as in-house counsel working under the direction of Grand Chief George Manuel.  By 1982, Pinder formed her own law firm to advance land claims on behalf of her First Nations clients for the firm of Mandell Pinder & Ostrove. She retired from her law practice in 2005. 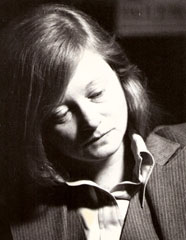 Her first novel, Under the House, culminates in a courtroom scene and exposes ugly secrets beneath a Saskatchewan family’s facade of respectability. Margaret Atwood praised it as “a haunting first novel by a writer of great talent and sensitivity.”

Her second novel, On Double Tracks (L&OD 1990), concerns the psychological intricacies of a B.C. Native land claims case. It was nominated for a Governor General’s Award. “I considered quitting the law and writing full-time,” she says, “But land claims were in their infancy, and I couldn’t abandon my clients until I felt we had established a stronger foundation, in the western legal system, for the claims. That took another ten years.”

The Carriers of No is her 1991 chapbook criticizing Judge Allan McEachern’s decision against the Gitskan-Wet’suwet’en land claim. 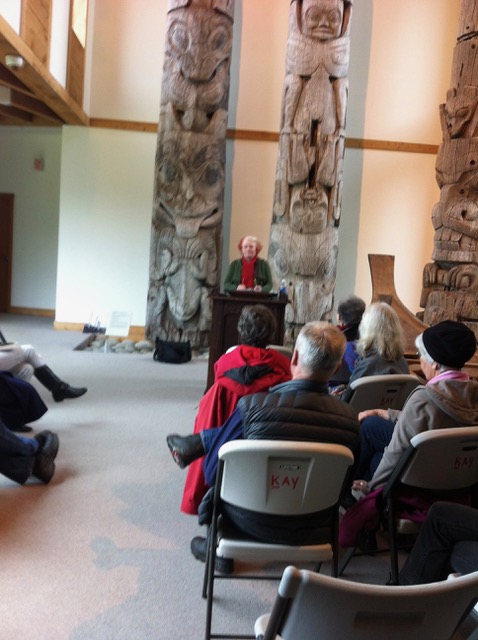 Reading from “Bring Me…” at Haida Gwaii.

Leslie Hall Pinder’s third novel, Bring Me One of Everything (Grey Swan 2012), blends fiction and fact to examine greed and the expropriation of First Nations artefacts. It opens with a flashback to 1957 when an anthropologist cuts down the largest stand of sacred totem poles in the world for museum display, hoping to salvage the artistic remains of the Haida. During its launch at the Waldorf Hotel in Vancouver, First Nations actress Columpa Bobb performed a dramatized part of the novel with directional assistance from Leslee Silverman (Artistic Director, Manitoba Theatre for Young People). Seven years later, Hall Pinder said, “As I wrote and wrote, and rewrote the book, I realized the story was actually about my protagonist’s search for her father.”

[Wikipedia: “Bloomsbury Publishing put out the first hardcover printing in the U.K. This was followed by an edition in the U.S., a translation into Finnish, softcover by Faber & Faber and finally another Random House Vintage edition in Canada. This novel has been revised and re-published by Shelfstealers, Inc. as an ebook and trade paperback (2012) with the audio book to be released in 2013.”] 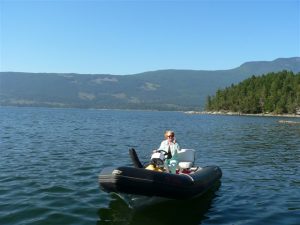 Leslie Hall Pinder lives on the West Coast of B.C.