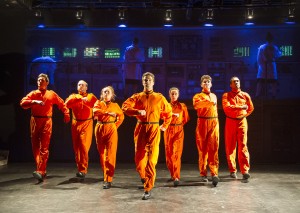 Idea and adaptation by David Mackay

If you go out for dinner, and the beginning of your evening is swell, and the end of the evening is fantastic, can one rightly complain about the meal?

David Mackay’s attempt to meld a non-verbal depiction of the Soviet-American space race with ‘The Rime of the Ancient Mariner’ for Kosmic Mambo at Studio 58 is half-baked.

But there are several strong reasons for liking this brash and disjointed production.

This show’s bold opening number is dazzling. We see two intrepid teams of would-be space heroes—Soviet cosmonauts and American astronauts—preening and prancing like opposing packs of wolves, or competing teams of cheerleaders. Hey, this is gonna be good!

Program notes have suggested the competition to reach the moon, and beyond, will have a soundtrack of mind-bending Sixties pop. And didn’t we detect the strains of ‘Eight Miles High’ by the Byrds before the show?

So we’re on board for liftoff. Maybe someone is going to do a Chris Hadfield imitation of him doing Bowie’s Major Tom. When was the last time you heard ‘Interstellar Overdrive’ off that first Pink Floyd album, the one with Syd Barrett? Or perhaps their ‘Astronomy Domine’?

It’s laudable to stretch the boundaries of theatre. No one can argue against the bravado of Studio 58—a testing and training ground for new talent—for challenging would-be professionals to express themselves exclusively within the parameters of non-verbal work set to music. And certainly co-creator Wendy Gorling can’t be faulted for her efforts to transcend the lack of a coherent storyline with physical theatre. This is the kind of thing they’d think is fairly normal in Quebec, right? So let’s see where Kosmic Mambo goes….

There is one lovely bit where a dog launched into orbit—we presume—goes around biting people. His puppeteer Tom Krushkowski does a superb job melding with the mutt, rushing the stage. But we give up caring what might happen next fairly quickly. The conceit that Kosmic Mambo is inspired by Coleridge isn’t justified by simply copying and pasting a Wikipedia entry into the program.

Kosmic Mambo can be welcomed nonetheless as a springboard for one performer in particular, Markian Tarasiuk. He shines as the bright and constant Northern Star of this experiment. Take note of that name.

After the spaced-out program finally sputters back to earth, the producers have enabled Tarasiuk and cast member Caitlin Goruk to choreograph a stupendous post-finale, basically a Ukrainian dance piece. They often had “Russian dancing” on the Ed Sullivan Show during the Space Race, so maybe that’s the tie-in. Cosmic is spelled with a K, and they’ve already tossed in the first Russia-Canada hockey series—the one in which Paul Henderson scored and Foster Hewitt couldn’t pronounce Yvan Cournoyer’s last name—so maybe that was the rationale? If they didn’t have hockey or Ukrainian dance halls in the days of Samuel Taylor Coleridge, well, no big deal. ‘The Rime of the Ancient Mariner’ is kinda ancient, right?

So everything turns out to be a preamble to Markian Tarasiuk absolutely astonishing the audience with his leaping ability. The audience gasps as one. Hey, did you just see what I just saw? He also does that bit where the dancer folds his arms and kicks his legs out from a squatting position, one after the other, with consummate ease. It’s riveting, joyous and a helluva lot of fun.

This closing number works as an ensemble piece, too. Suddenly we see the performers relax and enjoy themselves. They know they are doing something that actually works!

Buoyed by Tarasiuk’s ebullient charisma—not only as a dancer, but as a livewire presence—we leave the theatre delighted by a few minutes of pure entertainment that could give Cirque de Soleil a run for its money. Tarasiuk is that good.