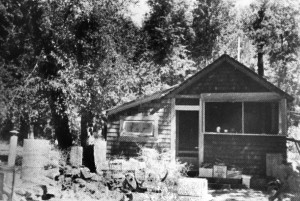 LOCATION: One Mile Creek was the name for Hunter Creek which flows into the Similkameen River from the west, about ten miles below Keremeos. near Princeton.

The man largely responsible for the creation of Manning Park, Martin Allerdale Grainger, was also the author of a classic B.C. novel called Woodsmen of the West (1908). A lover of the great outdoors, he built a wilderness cabin [at right] on One Mile Creek, near Princeton, where he wrote much of his posthumously published, second book, Riding the Skyline (1994). Grainger commenced his campaign to create Manning Park after construction of a Hope-Princeton Highway commenced in 1929 as a Depression era make-work project for unemployed men. Grainger predicted real estate prices would soon rise; hence he argued for the creation of a wilderness reserve sooner rather than later. The Hope-Princeton Mountain Park was created in 1941, just before Grainger died at 66. It was soon renamed for Chief Forester Ernest C. Manning who died in a plane crash that same year. The Hope-Princeton Highway was eventually completed in 1949.

The classic work of early B.C. logging literature is M.A. Grainger’s only novel, Woodsmen of the West (1908). Its narrator describes working in a logging camp in “Coola Inlet” operated by a jack-of-all-trades roughneck from Nova Scotia named Carter. A co-worker named Bill Allen admires Carter as “a black figure of activity” who succeeds with his “desperate drive-her-under pigheadedness.” The narrator is an aloof observer of the action who nonetheless conveys admiration for the remarkable terrain and the industry of man. The story and setting are derived from Grainger’s own experiences at Knight Inlet.

Born in London on November 17, 1874, Martin Allerdale Grainger grew up in Australia, won a scholarship to Cambridge, excelled at mathematics, graduated in 1896 and set out with two friends for the Klondike Gold Rush of 1897. Grainger became stranded in B.C.’s Cassiar region so he hauled freight in the Stikine River area, learning wilderness skills. He also worked as a backpacker for the Hudson’s Bay Company and assisted in the rescue of some miners on the Laird and Dease Rivers.

Grainger got a job looking after horses in order to gain his passage to South Africa in 1899. Despite his flat feet, Grainger was able to enlist in Lord Roberts’ Horse and serve as a Lieutenant in the Boer War. Critical of the war effort, he wrote dispatches to the London Daily News, revealing his penchant for non-conformity and idealism. Grainger returned to B.C. in 1901, working as a placer miner around Atlin and Dease Lake, then as a logger in the Minstrel Island area. Grainger met Mabel Higgs, the sister of his closest friend, on Pender Island. In 1903, Grainger worked as a handlogger at Knight Inlet, gathering the experiences that would be documented in his semi-autobiographical first novel, Woodsmen of the West.

After Mabel Higgs returned to England, he followed and proposed. The story goes that Woodsmen of the West was mostly written in England in order for Grainger to earn himself the $300 he needed to finance his steerage passage back to Canada, while Mabel made the same journey in first-class. With sardonic humour, he dedicated the novel “To my creditors affectionately.”

The pen was mightier than the axe. Grainger wrote speeches for forestry Commissioner Alfred Flumerfelt and he served as secretary on the Fulton Royal Commission to investigate logging practices in 1910. Soon thereafter M.A. Grainger became one of the two main authors of B.C.’s Forest Act of 1912, along with conservationist Overton Price. These guidelines would serve as the basis for B.C.’s forestry policies for decades to come. It was Grainger who is credited with introducing the concept of sustained yield. After he helped H.R. MacMillan gain the position of Chief Forester in World War I, Grainger himself became Acting Chief Forester. When MacMillan resigned, Grainger became B.C.’s second Chief Forester in January of 1916.

Grainger much preferred fieldwork. Having injured his feet during a tour of the Hazelton area in 1914, he thereafter preferred to wear mocassins. Never a slave to convention, Grainger annually had his secretary draw an outline of the sole of his foot on a piece of paper each year and then had the diagram dispatched to a First Nations village to have three pairs of moccasins made. When Grainger was introduced to King George V and Queen Mary in London in 1920, he wore his moccasins. (He was representing B.C. at an Imperial Forestry Conference.)

According to Jenny Clayton’s contribution to Stewards of the Forest (Royal B.C. Museum 2014), “Grainger changed the direction of the Forest Branch from marketing B.C.’s lumber to managing timber, with a regulatory focus. He hired staff on merit, and avoided political appointments, to make the Forest Branch more independent. He launched public education programs and favoured research to reduce the lower-grade timber. While he viewed old-growth forests as a form of waste, he did argue for increased stumpage to pay for fire-fighting and regeneration.”

Retrospectively, it is easy to praise Grainger as a conservationist ahead of his time. “The world has never seen timber massacred on such a scale before,” he once wrote. “There is more knocked down and wasted than ever grows in most countries.” But from 1920 onwards, having resigned in response to government and industry opposition to his progressive intiatives, he became director of the B.C. Timber Industries Council during the early 1920s. Thereafter Grainger worked in the private sector, forming the Timberland Investigation and Management Company in 1922 with Aird Flavelle and Frank Pendleton. To his credit, Grainger became estranged from the Industries Council in 1924 when this employers’ consortium objected to efforts to introduce minimum wages and an eight-hour work day. Grainger’s company became M.A. Grainger Co. Ltd., headquartered in Vancouver’s Metropolitan Building. The Depression adversely affected his income as a broker for British-based lumber investors.

Grainger travelled extensively in the wilderness environs northeast of Hope, forming a keen attachment to the Princeton area when he visited it on horseback with forest ranger Bert Thomas. He called the area he wanted preserved between Hope and Princeton ‘Arcadia’ after the mountainous region of Greece which came to denote a rustic paradise. There he wrote many of the meditative and environmental pieces about nature that were edited some fifty years later by Peter Murray for Riding the Skyline.