Defender of the Wet’suwet’en 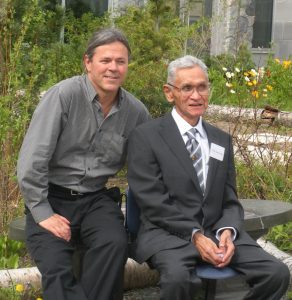 Song of the Earth: The Life of Alfred Joseph

Song of the Earth is the story of Alfred Joseph, a long time Wet’suwet’en hereditary chief, a respected “knowledge holder” of the Nation’s history, an artist, teacher, and a noted defender of Wet’suwet’en rights. It is also the story of how the arrival of European settlers changed Wet’suwet’en lives.

Albert Joseph was born in 1927 in Hagwilget, a Witsuwit’en village on the lower Bulkley River in northwestern British Columbia. Until the European settlers arrived, the villagers were independent. They fished, trapped, hunted, and gathered berries and medicinal plants in their territory. As the settlers’ development encroached on their land, the villagers had to depend on the wage economy, finding work in off-reserve industries such as fish canneries and logging.

Joseph was raised by his grandmother in the Wet’suwet’en culture. He knew both the old ways and the new. He grew up listening to the elders, attending feasts, and understanding the importance of traditions. He remembered all he learned.

Ross Hoffman, professor in First Nations Studies at the University of Northern British Columbia, lived and worked in Wet’suwet’en territory from 1985 to 2006. He first worked with Joseph in 1996 developing a course on Wet’suwet’en culture for UNBC. In 2006 they began collaborating on Joseph’s story. They made a good team. Hoffman had access to court records and other documents, Joseph had first hand knowledge of many events, and much of the story is told in his words. Unfortunately he died in 2014, before the book was published.

Joseph went to a village school before going to Lejac residential school at Fraser Lake. After Lejac he spent sixteen years working at a variety of jobs across western Canada. In 1956, when told by Indian Affairs to return to his reserve or lose his Indian status, he chose his status. Back in Hagwilget, he took up the traditional art of carving. A talented carver, his work is in private collections and museums all across the country.

The 1950s were not good years for Canadian Indigenous peoples. In 1951 the federal government suddenly made it legal for status Indians to drink alcohol. The Wet’suwet’en didn’t escape the disastrous problems resulting from alcohol abuse. Then came the “scoop”– Indigenous children were taken into “care” by provincial agencies if their parents were deemed unfit. In 1959 the Department of Fisheries destroyed a huge rock in the river near Hagwilget, believing it hindered salmon getting to the spawning grounds. Instead, it destroyed the villager’s fishing grounds, devastating both their economic and social welfare. Fifty years later, at age 80, Joseph represented the Band in taking the federal government to court on the issue. In 2008 Canada paid the villagers $21.5 million in compensation.

Carving took a back seat when Joseph was elected to the Hagwilget Band Council in 1961. He served as a councillor or chief for some 20 years. Band councils are a federal government creation. They provide community services as funded by Indian Affairs. In 1973 Joseph was chosen a hereditary chief, a very different role.

Wet’suwet’en society is composed of five matrilineal clans, each divided into house groups of extended families, each house headed by a hereditary chief. Joseph was born into Keykilh Winits, one of three house groups in the Gidimt’en ( Wolf/ Bear Clan ). As a traditional house chief, he was given the name Gisdewe or Gisday wa (Dini ze’ Gisday’wa). He held the position until his death. Hereditary chiefs are responsible for protecting their land, keeping the traditions alive through education, protocols, and ceremonies, and for hosting feasts which play a huge part in both the governance and social life of the Wet’suwet’en and their neighbours. Joseph’s wife was Gitxsan and this meant he was included in the Gitxsan feast system.

In 1977 the Gitxsan Witsuwit’en Tribal Council hired Joseph as a researcher to work on their comprehensive land claim. He went on to play a lead role in the historic Delgamuukw and Gisday wa v. British Columbia trial (also known as Delgamuukw v. The Queen). His skill as an orator combined with his detailed knowledge of the territory and history were awesome in court. Government lawyers tried to trap him but he always had an answer. Launched in 1984, the case was resolved in the Supreme Court in 1997. Along with recognizing the land claim, the Court recognized oral testimony for the first time.

The Wet’suwet’en traditionally told their history through song. After colonization the song often became a lament by elders to remind themselves and others of happier times. Joseph thought the “Song of the Earth” would help create understanding between the Wtsuwit’n and non-natives. It should.

This is a timely read. The Wet’suwet’en are again defending their territory, this time from a proposed pipeline that would bring fracked gas to an LNG facility near Kitimat. 9781928195054

Alfred Joseph’s headstone pull. His clan and community pull the sled towards the gravesite while his family and members of his house try to pull the headstone back. Photo courtesy of Walter Joseph

Diana French has called the Cariboo Chilcotin her home since 1951, when she came to teach in a one-room school. She married Bob French, the son of a pioneer family, and they lived in different parts of the area before settling in Williams Lake in 1970. Along with raising five sons, Diana continued to teach, and later worked as a reporter then editor for the Williams Lake Tribune. She still writes a weekly column for that paper. She is the author of The Road Runs West: A Century Along the Bella Coola/ Chilcotin Road (Harbour Publishing, 1994) and co-authored with Rick Blacklaws, Ranchland: British Columbia’s Cattle Country (Harbour Publishing, 2001). She lives in Williams Lake.

Alfred Joseph (left) with Dora Wilson and Don Ryan, members of the Delgamuukw litigation team, preparing for the trial, circa 1984. Photo courtesy of Antonia Mills