Getting Wagamese into the circle

There was muted applause—for good reason—when Richard Wagamese was announced as this year’s winner of the Bill Duthie Booksellers’ Choice Award for Embers: One Ojibway’s Meditations (D&M). 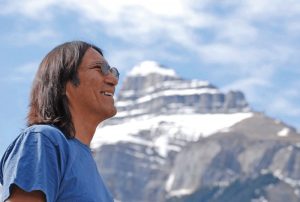 Four prizes out of seven went to books with Indigenous content at the 33rd annual B.C. Book Prizes.

This is mutually a publisher’s award but unfortunately the presentation process hadn’t made that clear, so it was encumbent upon publisher Howard White to explain why he was on the stage—for his tenth acceptance speech in this category since 1994—and why Wagamese was not.

“I so wish he was here to accept this,” said White, who described Wagamese as a natural, brilliant writer who overcame enormous difficulties as a child and youth.

“He suffered enormously. It was only in his twenties, when he began connecting with his Ojibway heritage, that he began to understand his potential as a writer.”

Seeing Wagamese put his heart and soul into Facebook posts, White suggested Wagamese should recalibrate his on-line meditations, giving rise to Embers, a non-fiction collection that topped the BC Bestsellers List for weeks prior to winning the Duthie Prize.

“I love accepting this award,” white continued, “because I get to remember Bill Duthie who presided over his famous bookstore at Robson and Burrard.” He recalled that although Andy Wright at Eaton’s nearby, in downtown Vancouver, was selling more books, it was Duthie who was beloved and became legendary.

In 1973, as a first-time book publisher with 3,000 copies of his first book, White was rebuffed by several bookstores before he entered Duthie’s with trepidation.

As Bill Duthie sat on his stool and thumbed through the new book, White’s heart sank. Duthie’s gruff manner could be intimidating. But Duthie bought one hundred books on the spot, paying White in cash, up front.

“He just wanted to give a shaggy kid a break,” White recalled.

Douglas & McIntyre and Harbour Publishing have won 19 of the 33 Duthie Booksellers’ Choice Awards since 1985. Having never received a B.C. Book Prize, the province’s most successful author worldwide, Douglas Coupland, ended up accepting his Lieutenant Governor’s Award for Literary Excellence sooner than he expected.

Rather than serving as the evening’s finale, as he had anticipated—Coupland was introduced at the outset of the ceremonies. He good-naturedly recalled his visits to remote B.C. locations with his father who had his own Beaver airplane.

“We all come from this place, which really is a place,” said the author of Generation X: Tales for an Accelerated Culture (1991). “It’s a very small province,” he said, “but it’s large at the same time. Your B.C. is not my B.C.”

Deborah Campbell received the Hubert Evans Non-fiction Prize for her second book, A Disappearance in Damascus: A Story of Friendship and Survival in the Shadow of War (Knopf).
Campbell did not speak much about her book which recalls the 2007 disappearance of her Syrian guide and friend, undercover journalist Ahlam, “It’s easy for us to feel we are on the edge of the world in B.C.,” she said, “but I think this is our strength.” Having previously won the 2016 LitPop Awards for Poetry and the Reader’s Choice Award for the 2016 Walrus Poetry Prize, another neophyte author, Adèle Barclay, took home the Dorothy Livesay Poetry Prize for her debut collection, If I Were in a Cage I’d Reach Out for You (Nightwood). “Poetry exists outside of capitalism and colonialism,” she said, during another brief acceptance speech. Neil J. Sterritt, another first-time author, made a similar comment when he won the Roderick Haig-Brown Regional Prize for Mapping My Way Home: A Gitxsan History (Creekstone), a multi-faceted look at the history, culture and politics in his northern Kispiox territory.

“When I was asked to write this book in 2008,” he said, “I wanted to respect all of the cultures.”
Sterritt delivered one of the few speeches that included personal details. “The first time I came to Vancouver in 1955,” he recalled, “I spent all my time in the library trying to get in touch with my people.” Sterritt moved back to the Kispiox in 1973.

From 1975 to 2009, he and his family lived at Temlaham Ranch, the site of a Gitxsan ancestral village on the Skeena River (a.k.a. Temlaxam or Dimlahamid), during which time he was hired as land claims director for the Gitksan-Carrier Tribal Council.

In Mapping My Way Home, he traces the history of the area at the junction of the Skeena and Bulkley Rivers, the resiliency of the First Nations residents who have maintained the villages of Gitanmaax and Hazelton, as well as his own personal story of growing up in Hazelton and helping his people fight the Delgamuukw court case.

Sterritt’s overview stretches from the creation tales of Wiigyet to the advent of oil and gas pipeline proposals, including tales of the Madiigam Ts’uwii Aks (supernatural grizzly of the waters), the founding of Gitanmaax, Kispiox and Hagwilget and the coming of the fur traders, miners, packers, missionaries and telegraphers. An award that stresses the role of the illustrator, the Christie Harris Illustrated Children’s Literature Prize was presented to author Monique Gray Smith—who contributed the brief text—and Cree-Métis illustrator Julie Flett for their collaboration on My Heart Fills With Happiness (Orca).

This was Flett’s third win in the category in seven years. She won the Harris Prize in 2011 for Owls See Clearly at Night and again in 2015 for Dolphin SOS, co-authored with Roy Miki and Slavia Miki.

The Sheila A. Egoff Children’s Literature Prize for the best non-illustrated book for children went to Iain Lawrence for The Skeleton Tree (Tundra Books) but the Gabriola Island resident was not present to accept it.

Winners of the prizes received $2,000 each; the recipient of the Lieutenant Governor’s Award received $5,000, courtesy of the Government House Foundation.

The gala was amicably hosted by JJ Lee, author of The Measure of a Man, and was attended by the Honourable Judith Guichon, Lieutenant Governor of British Columbia at the Pinnacle Harbourfront Hotel in Vancouver on April 29.

All BC Book Prize photos by Monica Miller JJ Lee, master of ceremonies charms the crowd at the BC Book Prizes.