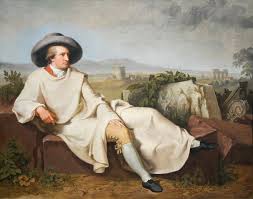 On a quiz show, given multiple choices, you could likely identify the polymath Johann Wolfgang von Goethe as a German who spent about sixty years refining his story about Faust, a guy who sells his soul to the devil. They re-did that story as a 1958 baseball movie called Damn Yankees, derived from a 1955 musical of the same name. And if you have a literary background, you’d know his novel about a doomed romantic, The Sorrows of Young Werther (1774) caused a sensation back in the 18th century, leading to a spate of mimicked suicides by overwrought young Romeos across Europe.

The hero’s quest for lifelong self-development in Faust reflects Goethe’s own creed: “Whoever occupies himself with constant striving, he can be redeemed.” Hence much of Goethe’s writing rings true for egocentric lifestyles in the 21st century.

Goethe had the luxury of being a free-thinker—thanks to the nearly lifelong patronage of Karl August, Duke of Saxe-Weimar—so his wide-ranging travels and studies led to remarkably modern views, well beyond his affinity for Spinoza’s notion of God-in-Nature.

Nonetheless, you probably have yet to bump into his poetry and epigrams. Goethe wrote love poems from ages eighteen to eighty, as translator Graham Good notes in his introduction to Goethe’s Poems (Ronsdale $18.95), but arguably it’s his wit and wisdom as a philosopher that make this collection most enticing.

If the world had German fortune cookies, these could work nicely:

Where would the joy of certainty be.

If we had never experienced doubt?

“Zeus, why am I short-lived?” asked Beauty.

“I only give beauty to short-lived things,” he replied.

Whoever serves the public is a wretched creature;

He wears himself out without a word of thanks.

Rulers and common people / from every era agree

That happiness only derives / from personality.

Above all, don’t hate anyone;

Let God take care of everything else.

For Johann Göethe, the “ö”, or umlaut (double dots), is usually dumped in English, resulting in Goethe, roughly spoken as “Gurta.”