Getting board with Star Wars 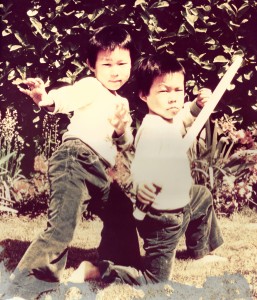 Jack and Holman Wang, as twin brothers growing up in Vancouver, were big Stars Wars fans when they were little. Jack Wang became a professor at Ithaca College in Ithaca, New York, and Holman Wang, a former lawyer, was a middle school teacher in Vancouver before becoming ‘full-time felter.’ As co-creators of the Cozy Classics board books, they subsequently teamed up for a re-telling of the Star Wars story for pre-school children. Starting with Star Wars Epic Yarns: A New Hope (Chronicle $11.95 U.S.), their series will reduce the saga into board books. Their first volume features twelve iconic scenes: Princess Leia sends a hologram message via R2-D2; Luke Skywalker learns how to use a lightsabre, etc. Jack Wang provides the pithy narration–as pithy as one-word per page–and Holman Wang has crafted the action figures. George Lucas has given his permission/blessing for the project. 9781452133935