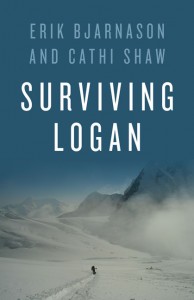 Trapped on the second-highest peak in North America, Mount Logan, during an extratropical cyclone would be a mountaineer’s worst nightmare. As vividly recalled in his co-written memoir, Surviving Logan (Rocky Mountain Books, $28), Erik Bjarnason has lived to tell the bad dream. Set to be released October 2016, his is a memoir of  bravado and dogged determination in a frozen wasteland, co-authored with Cathi Logan.

A 40th Anniversary Expedition to Mount Logan was organized in May of 2005 by North Shore Rescue. The expedition was standard, and the team was comprised of experienced mountaineers including search & rescue personnel. Beyond anyone’s control, things took a dreadful turn for the worst on May 25. With winds raging up to 140 km/h,  a rare extratropical cyclone trapped three members of the team on an exposed ridge known as Prospector’s Col.

With only a tent for shelter Don Jardine, Alex Snigurowicz and Erik Bjarnason huddled for over 20 hours, until their only protection began to disintegrate. Trained for survival in extreme circumstances, Bjarnason’s companions started work on a snow cave while Bjarnason melted snow so that they could rehydrate. Bjarnason nearly lost his life when a gust of wind ripped the tent from its ice screws, almost spitting him off the ridge, before it abated over the edge of the mountain. He had his life, but they had lost most of their gear except for two sleeping bags, a sleeping pad, a pot lid and an ice axe. Worst of all, Bjarnason’s hands were now exposed because he had lost his ovenmitts.

It was time to wait out the snow storm or die, whichever came first.

The three men took shelter in a snow cave built by Snigurowicz and Jardine. By morning the storm had passed. But hypothermia, severe frostbite and three feet of new snow prevented a retreat from the mountain. The trio was eventually airlifted off the mountain by a Lama high-altitude aircraft through the combined efforts of North Shore Rescue, the Alaskan Air Guard, Denali National Park staff and the Canadian Park Service. After losing all of his fingers, and one thumb it seemed impossible for Bjarnason to continue his career as a firefighter and mountaineer. But Bjarnason retrained and requalified for his career job as a North Vancouver firefighter. Just thirteen months after his rescue from Mount Logan he climbed Europe’s highest peak, Mount Elbrus, in Russia.

Erik Bjarnason has been on expeditions to five of the Seven Summits, including Everest, which he visited after loosing his fingers on Mount Logan. He has climbed mountains across five continents, completed a month-long dogsled trip to the magnetic North Pole and he has explored the entire length of the Amazon from the highest point in Bolivia to the Atlantic Ocean. A long-time member of North Shore Rescue, Bjarnsaon lives in North Vancouver.

Cathi Shaw of Summerland is the author of the young adult series The Marked Ones (Ink Smith Publishing) and co-author of Writing Today: Canadian Edition (Pearson Canada). She teaches professional, academic and creative writing at the university level. Shaw was born on the North Shore of Vancouver and made her home there for more than twenty years. 9781771601924

One Response to “Frozen but fearless”