From Southlands to Halifax 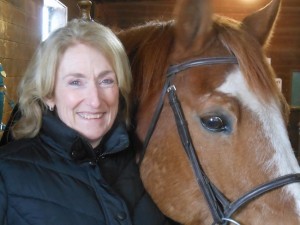 Based in Halifax, Nova Scotia, Marjorie Simmins is a bi-coastal freelancer whose first memoir Coastal Lives (Nimbus 2014) was a love story about two writers, herself and Silver Donald Cameron, and two of the three coasts of Canada, east and west. It has led to a second memoir, Year of the Horse (Pottersfield $21.95), about horse riding on both coasts. After a life-changing accident while riding in 2011, Marjorie Simmins had two choices: quit forever, or start again, in many different ways. “I chose the latter,” she says, “and have had five extraordinary years of healing and adventures. Whether you ride horses or not, whether your own adventures involve the other sacred elements – earth, water, or fire, not air – this book is intended to give you the best seat in the house, atop one of the world’s most elegant and swift creatures.”

Simmins learned to ride at Southlands in Vancouver and was a horse owner there, so there’s an entire chapter on the horses, barns and people of Southlands during the 1970s, ’80s and ’90s. The West Coast launch for Year of the Horse will at Southlands Riding Club on November 24, 2016, starting at 5:30 pm.

A former commercial and sport fishing journalist on the West Coast, Simmins has a Bachelor of Arts in English Literature from the University of British Columbia and a Certificate in Adult Education from Dalhousie University. In 2011, she completed a Master of Arts, Research in memoir studies, at Mount Saint Vincent University. She writes about women’s health, dogs, coastal lives, coastal fisheries and the equestrian world. Her essay, “Trips from There to Here,” published in Saturday Night, won a Gold Medal at the 1994 National Magazine Awards.