From Pitt Meadows to acceptance 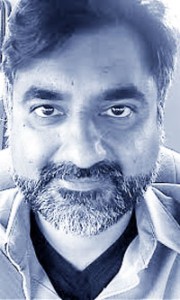 Phinder Dulai has received news that his book written in response to the Komagata Maru incident and his life in B.C. called “dream / arteries” (Talonbooks 2014) has been selected for use in B.C. high schools.

In response to this news he writes:

“I remember the first time I discovered poetry – it was grade 11 high school English and it was when we read The Love Song of J Alfred Prufrock. This was in Pitt Meadows where I and family lived.

“I have always thought that in the midst of some of the most vulnerable moments for a teenager during those high school years, there is always some space for one to escape to and my English classes were this for me; that and post punk and alternative new wave music from the 1980s.

“Those were very tough years for a coloured kid, a teen that sat at the back and did not say much or feel intelligent, but the years did provide lessons.

“Now BCERAC has reviewed and recommended dream / arteries for high school courses throughout BC in the areas of language arts, social studies and social justice.

“This is significant. I think I might be the first South Asian of Punjabi descent whose book has been included, both this year and any time before; I am so grateful to the ERAC evaluation team for so clearly identifying the potential strength of where dream / arteries might inspire and live within the teachable moment; also important – this is where I have made home, this is where I have spent the most significant amount of my life.

“Being sanctioned in this way means a lot for me given the anecdote I offered above; particularly because the focus of dream / arteries span across an arc of thematics; as had my previous books. I am hopeful that through this institutional curricular adoption and recommendation, the perspective I brought to consider the documentation of the Komagata Maru and other sections of the book will result in good paths to learning for students and some material that can be moved into a dynamic teaching moment.”

Born in 1967, Phinder Dulai has given readings and talks on Canadian literature, with an emphasis on migrant voices, for schools, colleges and universities both in and outside of Canada. He has worked in print journalism in Vancouver’s South Asian media and was an associate producer for Gabereau Live. His poetry has been published in Ankur, Rungh, The Canadian Ethnic Studies Review, and the Toronto South Asian Review. Excerpts of his poetry have been featured in the Vancouver Sun and The Globe and Mail. He works for the BC government and lives in Burnaby with his wife and two daughters.

A REVIEW OF dream / arteries

A hundred years ago, a Sikh entrepreneur named Gurdit Singh Sarhali chartered a Japanese steamship, the Komagata Maru, for $66,000, to set sail for Canada with 376 British subjects (including 340 Sikhs) aboard. They were travelling from Punjab, India, via Japan, in order to test Canada’s racist immigration laws.

Nearly all the passengers were not allowed to come ashore. The Komagata Maru sat moored in Vancouver’s harbour for two months while courts deliberated on the case and some of the city’s white citizens lined the pier taunting those onboard. Passengers were without sufficient food and drinking water.

In 1908, Canada had passed a law that allowed government officials to prevent immigrants who had not travelled by “continuous journey” from their country of origin. It was known that the distance from India to Canada necessitated stopovers along the way.

One of the Canadian navy’s first ships, the HMCS Rainbow, eventually sailed into Vancouver Harbour and forced the Komagata Maru back to Calcutta, with deadly consequences for many aboard.

Almost a century later the B.C. government formally apologized for the 1914 Komagata Maru incident. Now a new memorial has been erected on the Vancouver waterfront to acknowledge the mistakes of the past.

Growing up in vancouver, Phinder Dulai has pondered the Komagata Maru story since his Vancouver college days in the late 1980s. He first wrote about it on the 80th anniversary of the stand-off in 1994 in the form of a fictionalized letter to one of the passengers on the ship.

“I could not get anyone in the larger print press to consider taking it on,” he says, “so it found a home at Rungh Magazine, an inter-disciplinary journal that provided some space for voices like myself. As young as I was, I was also very determined to have the piece find the light of day. It eventually appeared in 1998.”

In his ‘A Letter to The Maru,’ Dulai addressed an unknown passenger whom he called Ranjeet. Dulai imagined him as the son of a poor farmer, later a soldier for the British Armed Forces, and that Ranjeet’s family had sold land that should have been Ranjeet’s inheritance to send him on the Komagata Maru to Vancouver.

“This letter is to you my friend, because you are not awake to your sacrifice to the greatest of endeavours: freedom, as you try to find ways out of the complete poverty of your arrival in the new land, and the living poverty at home on the farm.”
In his third poetry collection, dream/arteries Phinder Dulai now connects those 376 passengers with other New World migrants who travelled on the same ship throughout its thirty-six-year history, including ports of call in Hong Kong, Japan, India, Turkey, Halifax, Montreal, and Ellis Island.

By drawing on the records, nautical maps, and passenger manifests of the Komagata Maru, Dulai demonstrates how the 1914 incident encapsulates a broader narrative of migration throughout the New World.

Dulai’s dream/arteries is “hybrid poetics” that mixes historical fact with fiction along the lines of Renée Sarojini Saklikar’s children of air india: un/authorized exhibits and interjections (Nightwood $18.95) which recently won the 2014 Canadian Authors Association Award for Poetry. Also Vancouver-raised, Saklikar was 23 years old when her aunt and uncle were murdered on June 23, 1985 during the bombing of Air India Flight 182.

Dulai’s viewpoint is original for its expansiveness. In his research, Dulai uncovered a letter sent to Sir Wilfred Laurier about the role of the HMCS Rainbow, pointing out, “this nucleus of the new Canadian navy was first used to prevent British subjects from landing on British soil.”

As well, Dulai has unearthed an obscure letter from an enlightened British subject:

“All the regiments have been formed from India. All our merchant ships steaming in all ports of the world have been built by the wealth of India. All the big buildings in London are built out of Indian money. If it were not for India, England would be unknown today. The modern towns of Edinburgh, Cheltenham and Bath have all been built with Indian money…but the Indian people are not aware of their strength.”
9780889229136