From navvy to Okanagan rancher

Luck brought Cornelius O'Keefe to "the best land in the Okanagan" where good arable land previously considered by the Syilx to be their's was up for grabs. He seized it. 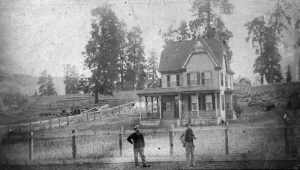 Ontario Gothic Revival in the Okanagan: first addition to the log house at O’Keefe Ranch c. 1887.

A new book tracks O’Keefe from Nepean, Ontario in 1861 seeking fortune in the West, to establishing the historic O’Keefe Ranch.

Cornelius O’Keefe:
The Life, Loves, and Legacy of an Okanagan Pioneer
by Sherri Field 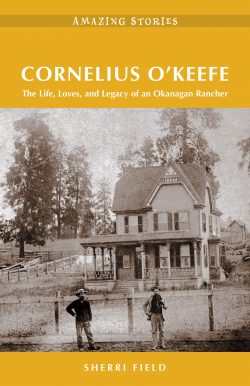 Sherri Field’s new book, Cornelius O’Keefe, the Life, Loves, and Legacy of an Okanagan Rancher, is a welcome addition to the short list of serious works about Okanagan history readily available to the general public. The book includes early photographs, a bibliography, extensive footnotes, and — I was delighted to find — an index.

Field is particularly good at laying out O’Keefe’s hardscrabble upbringing in Nepean, near Ottawa in eastern Ontario. Understanding his family’s struggle to establish their modest farm in the rocky soil of Carleton County helps explain O’Keefe’s entrepreneurial drive in his later life. Field identifies an aspect of O’Keefe’s family that would have marked the young Cornelius: O’Keefe’s father had come to Canada as an impoverished Irish immigrant and worked as a navvy on canal construction in the 1820s and 1830s. As Field points out, “As a youngster, Cornelius O’Keefe must have been aware of the [discrimination] faced primarily by Irish navvies, including his father; perhaps these early experiences with discrimination led the younger O’Keefe to seek a higher position in life.”

Field goes on to pinpoint O’Keefe’s peregrinations in British Columbia after he left Nepean in 1861 to seek his fortune in western Canada, where he worked on the Cariboo wagon road. She relates how, in the spring of 1867, O’Keefe and two partners, Thomas Wood and Thomas Greenhow, set off with their cattle for the Big Bend mining camps via the Okanagan. When they reached the north end of Okanagan Lake, they abandoned their plan and opted instead to preempt land and settle.

“Vanguard of the Pine near Okanagan Lake,” by the Governor-General, the Marquis of Lorne, 1882, showing the O’Keefe Ranch houses. Courtesy of the Royal BC Museum and Archives

Although Field doesn’t explore Okanagan cattle ranching in detail, it helps to understand her account if we take a look at the Okanagan as it was developing in the 1860s. The imperatives of early ranching configured early Okanagan settlement patterns for the first forty years of white European settlement in the valley, starting with the founding of Okanagan Mission by Oblate priests in 1860. The Oblates themselves, to help support the mission, became cattle ranchers, part of a small but influential band of ranchers who took advantage of the relatively ungrazed grasslands and mild climate of the valley to establish ranches from the American border to the head of Okanagan Lake.

Some of these early ranchers started out advantageously, like the rancher Charles Houghton, who received generous land grants in exchange for his services in the British army, and John C. Haynes, the judge, customs inspector, and gold commissioner for the area. Haynes acquired large holdings, including valuable winter range already formally allotted to local Syilx people. He was able to take advantage of his connections to overcome objections from the Indian Commissioner, G.M. Sproat, that his ranch was infringing on land set aside for the band. Other settlers, like Eli Lequime in the central Okanagan, O’Keefe, Greenhow, and Wood in the north Okanagan, and Tom Ellis at the foot of Okanagan Lake, began by pre-empting relatively small plots of land and then gradually expanding their holdings.

These early ranchers, because they had a head start, were able to expand their ranches and their herds by making strategic purchases of key properties. As Field points out, along with early businessmen like Moses Lumby, the founder of the town of Enderby, and Francis Barnard, founder of the B.C. Express Company, they formed a nucleus of important land-owners and investors who exerted direct power locally and had political influence in Victoria. Their focus, as Field emphasizes in the case of O’Keefe, was on expanding their own holdings. This was sometimes at the expense of local Syilx bands, who were competing for the same rangeland and water sources for their horses and cattle, and sometimes at the expense of smaller local white ranchers, who were also competing for the limited grazing space and good winter range available within the confines of the valley.

Field steers her account of Cornelius O’Keefe away from some of these larger themes. She instead focuses on O’Keefe himself, his incredible good-fortune (he and his partner, Thomas Greenhow, were able to preempt prime bottomland in the north Okanagan and expand their holdings without serious competition), and his ability through his own hard work and perseverance to transform his holdings into a profitable ranch.

O’Keefe and Greenhow’s sheer good luck deserves emphasis: they happened to pass through the region because he, Greenhow, and Thomas Wood were driving their cattle from Oregon to the mining camps on the Big Bend of the Columbia River. They came to the area near present day Vernon where the narrow confines of the Okanagan valley opened up to the broad fertile grasslands that lay at the juncture of the Okanagan and Spallumcheen valleys, suitable both for cattle and unirrigated cereal and hay crops. O’Keefe and Greenhow recognized the opportunity (they had the cattle on the spot and the land was open for preemption) and seized it.

Their arrival coincided with the recent reduction of the size of Indian reserves in the Okanagan — only two years earlier. The original 1861 allocation for the Head of the Lake Reserve, about twenty square miles (over 5000 hectares) of what John C. Haynes termed “the best land in the Okanagan,” and which included much of the land that ultimately made up the O’Keefe ranch, had been drastically revised after governor James Douglas’s retirement in 1864. The new administration abandoned Douglas’s more generous Native land policy, and in the case of the Head of the Lake Reserve, reduced the allocation to about 1000 hectares. For O’Keefe and Greenhow, good arable land previously considered by the Syilx to be theirs was up for grabs.

Field, drawing on O’Keefe Ranch records, does a meticulous job of tracing how O’Keefe (at first still in partnership with Greenhow) expanded his ranching operation throughout the 1870s and 1880s, and in the 1890s added grain production. She takes pains to compare his early success with the progress of other early settlers like A.L. Fortune in Enderby and Forbes Vernon in the nearby Coldstream district.

In her treatment of O’Keefe’s “country wife,” a Syilx woman named Alapetsa, Field is circumspect. She carefully outlines what we know of Alapetsa and her relationship with O’Keefe, what we know of their two children, and traces what happened to her and their daughter after O’Keefe decided to break their common law relationship, presumably not long before he went back to what was now the Province of Ontario in 1877 and married Mary Ann McKenna, like him a Catholic. He and McKenna were married in St. Patrick’s Catholic Church in Fallowfield, the same church where O’Keefe had been confirmed as a child. 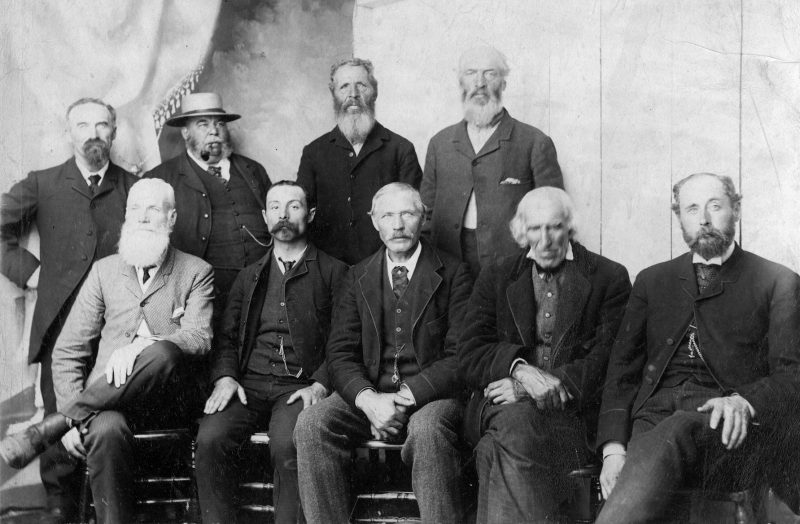 Although Field correctly identifies the story of O’Keefe’s Indigenous partner as historically important, there is something jarring in her treatment of Alapetsa’s ejection from the ranch. Field cites the view of one of O’Keefe’s employees that Alapetsa was “apparently quite agreeable to accepting a gift of a few hundred dollars and returning to her native domicile,” but surely the view of a white ranch-hand who had worked for O’Keefe more than ten years after the de facto expulsion took place should be taken with a grain of salt. Faced with the arbitrary decision of a powerful white landowner, what other choice would Alapetsa have had?

I have the same difficulty with Field’s treatment of the mixed-race family of another local rancher, E.J. Tronson. Field concludes that, “despite the ‘handicap’ of an Indigenous wife, Tronson was highly regarded by most people.” She quotes the view of a contemporary English immigrant, C.W. Holliday: “To see [Tronson] in church looking rather like a saintly old patriarch you would never have suspected … that on his ranch he maintained an Indian wife and a large half-breed family.” 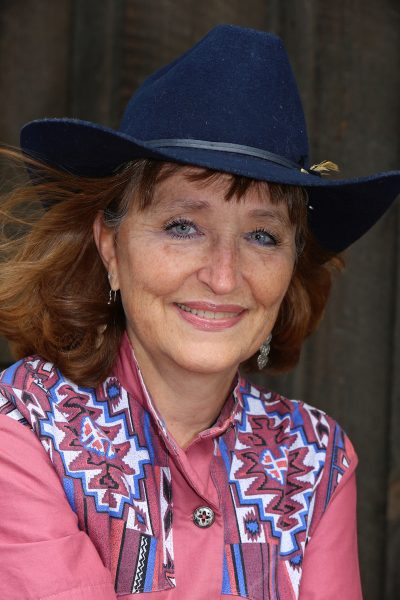 One can imagine Holliday passing on what he considers a comic description of Tronson, tinged with the casual racism of the era, for the entertainment of correspondents back in his native England, but should we be astonished at local complacency towards the ranching elite’s mixed-race relationships? It can hardly be surprising that Tronson was held in high esteem in the white community, given the uncontested power of the Okanagan cattle ranchers during the ranching era. The balance of power was never going to be on the side of the Indigenous woman.

O’Keefe’s strong Catholicism leaps out in Field’s account. He made the lengthy trip back to Carleton County twice to find a Catholic wife (the second trip in 1899, after his first wife Mary Ann’s death). Field reports that on the latter trip, planned for the wedding of one of his daughters, he ended up marrying the sister of the groom, forty years his junior! A lasting testament to the importance of O’Keefe’s Catholic faith is the Catholic church, still standing, that he had built next to his house.

Field’s carefully researched book is a valuable contribution to the sparse literature on the Okanagan’s cattle-ranching era. It was a time when mini empires were built and family fortunes were forged. It was also an era when the fragile natural environment and the human geography of the valley began to be radically and irrevocably reshaped, but that is another story. 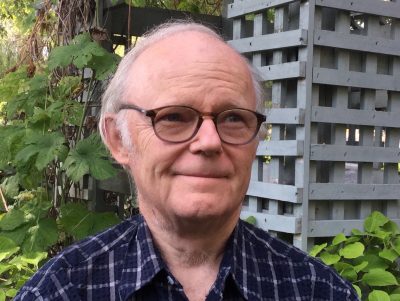 Ian Pooley is an Okanagan historian. His previous articles have appeared in academic journals, and Okanagan Historical Society reports. His most recent articles include “When the Titans Met, Railway Rivalry in the Okanagan and Kelowna’s Rise as a Fruit-Shipping Centre,” which appeared in BC Studies, Winter 2012/2013, and “(Re)settling the Central Okanagan, 1860-1904: Land Monopoly, Small-Scale Ranching, and Marginalized First People,” in BC Studies, Spring 2017. Ian Pooley comes from a Kelowna orcharding family; his grandfather, Walter R. Pooley, along with E.M. Carruthers, bought the Lequime Ranch in 1904, and shortly afterwards, along with T.W. Stirling, started the Kelowna Land and Orchard Company. He is currently preparing two studies on Okanagan socio-economic history.