From forklift to fiction 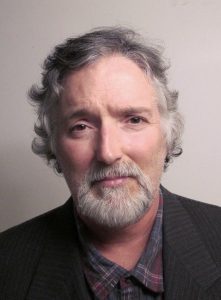 Born in Vancouver in 1953, Vic Cavalli has been teaching English at the university level since 1987, and Creative Writing at the university level since 2001. His fiction, poetry, photography, and visual art have been published in literary journals in Canada, the United States, England, and Australia. While teaching at Trinity Western University in the Fraser Valley he will publish a novel, The Road to Vermilion Lake (NY: Harvard Square Editions, 2017), concerned with exploring the themes of generation and regeneration.

After fronting some high school bands, Cavalli worked for seven years at manual labor jobs (such as operating machines and driving forklifts in factories, building steel fishing boats, and logging—setting chokers and falling trees). Eventually, an educated friend advised him to enroll in first-year College, adding, “Read some Russian novels.”

According to his website: “Vic Cavalli grew up in Vancouver B.C. surrounded by narratives of immigration and the Canadian wilderness, the arts and the trades. His Swiss mother (who spent her youth in Smithers, B.C.) taught sewing for most of her life and was a professional seamstress. His Italian father (who spent the prime of his youth gold mining in the Yukon) was an excellent musician, carpenter, and master welder who literally signed his finished projects with his welding rod as if they were paintings.

“Vic’s childhood home was filled with music, art, large house parties (optimally with two or three accordions, a mandolin and a guitar), Italian songs, wine, and spaghetti dinner feasts. Within this context, he and his father lived for the weekends and summer holidays when they would camp and fish in some of the most beautiful settings imaginable: the rivers and lakes of the Interior of British Columbia, and the Pacific ocean shoreline from Horseshoe Bay to Squamish, and off the eastern shore of Vancouver Island.

“Also, Cavalli was mentored as a boy in state of the art photography by his uncle Lucius, who had hiked the Alps as a young man and had photographs of newly discovered species of wildflowers published in scientific journals in his early teen years. He’ll never forget the 35mm camera Lucius gave him and his patient instruction.”