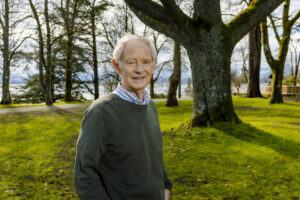 Stewart Goodings, chairman of the Denman Island Writers Festival has released his debut novel, My Friend, My Enemy (FriesenPress $23) about two childhood friends reconnecting many years later. Nadezhda and Alla had spent their childhood summers together near the Caspian Sea, becoming ‘almost sisters.’ Fate re-united them twenty years later but by then Alla had lost family in the Russia-Chechnya war and had secretly been recruited for a revenge mission. In the beginning, Nadezhda did not know any of this even though she was sharing a Moscow apartment with her long-lost friend. As they find their lives entwined in unexpected ways, the question arises, can a friend also be an enemy? Through Nadezhda and Alla’s exposure to the limits and sacrifices of friendship, Goodings explores the impact of secrets, family losses and terrorist misadventures. 9781039153929