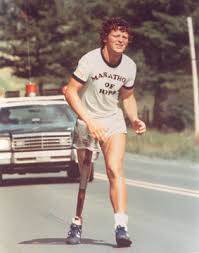 There is a new kids book, Terry Fox and Me (Tundra $21.99), written from the perspective of Terry Fox’s boyhood basketball friend, Doug Alward, identified only as Doug, who helped the under-sized Terry earn a spot on his first basketball team and was later “by Terry’s side every step of the way: when Terry received a diagnosis of cancer in his leg, when he was learning to walk – then run – with a prosthetic leg and while he was training for the race of his life, his Marathon of Hope.” With text by Mary Beth Leatherdale and illustrations by Milan Pavlovic, this story for children aged 4 to 8 focuses on friendship and loyalty. 9780735267688