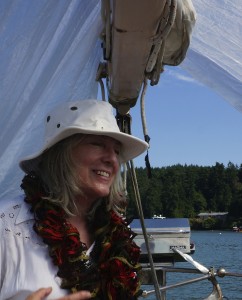 Darwin Marsh,the hero of Lillian M. Varcoe’s first novel, Headwinds: Seeing a Murder Forgotten (Amazon $7.99), is a veteran floatplane pilot who lands an easy job flying Hollywood North movie types–a swell change from flying into northern logging camps and fishing resorts. Trouble is, cold-case cops are accusing him and his grandfather of complicity in a murder. As far as Marsh can recall, he was vacationing with his grandparents on a Gulf Island when the murder happened. He must revisit childhood memories of a summer spent “in a rancorous community of draft dodgers and volatile losers” in order to clear his name. Lillian M. Varcoe [in photo] flew floatplanes and sailed on the B.C. coast for thiry years. She is the first woman to fly across Canada, coast to coast, and the first person to do it in a floatplane. She has written for Aviation Canada, EAA Sport Aviation, Westworld, Pacific Yachting and many other magazines. Varcoe lives on a small Island in B.C.’s Salish Sea with her partner, raccoons and deer. (Amazon $7.99; Kindle $3.99; Chapters/Indigo $6.25; iTunes $4.99) 978-0-9878331-2-9.