Banyen Books has become known for its large selection of spiritual titles and its post-hippie ambience under its owner Kolin Lymworth. 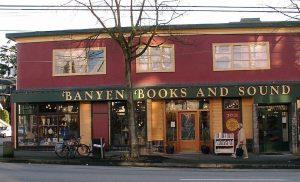 “We at Banyen are stoked to help (in our bookstorely way) all us humans to upgrade our nature-and-heart-based operating systems.” – Kolin Lymworth, bookseller

Beyond public view, behind his 5,000-square-foot bookstore at Dunbar and Fourth Avenue, there’s a zen garden with a tiny waterfall that owner Kolin Lymworth can look at whenever his task of choosing more new volumes for the 300 subject areas in Banyen Books gets to be burdensome after his fifty consecutive years as an independent bookseller. 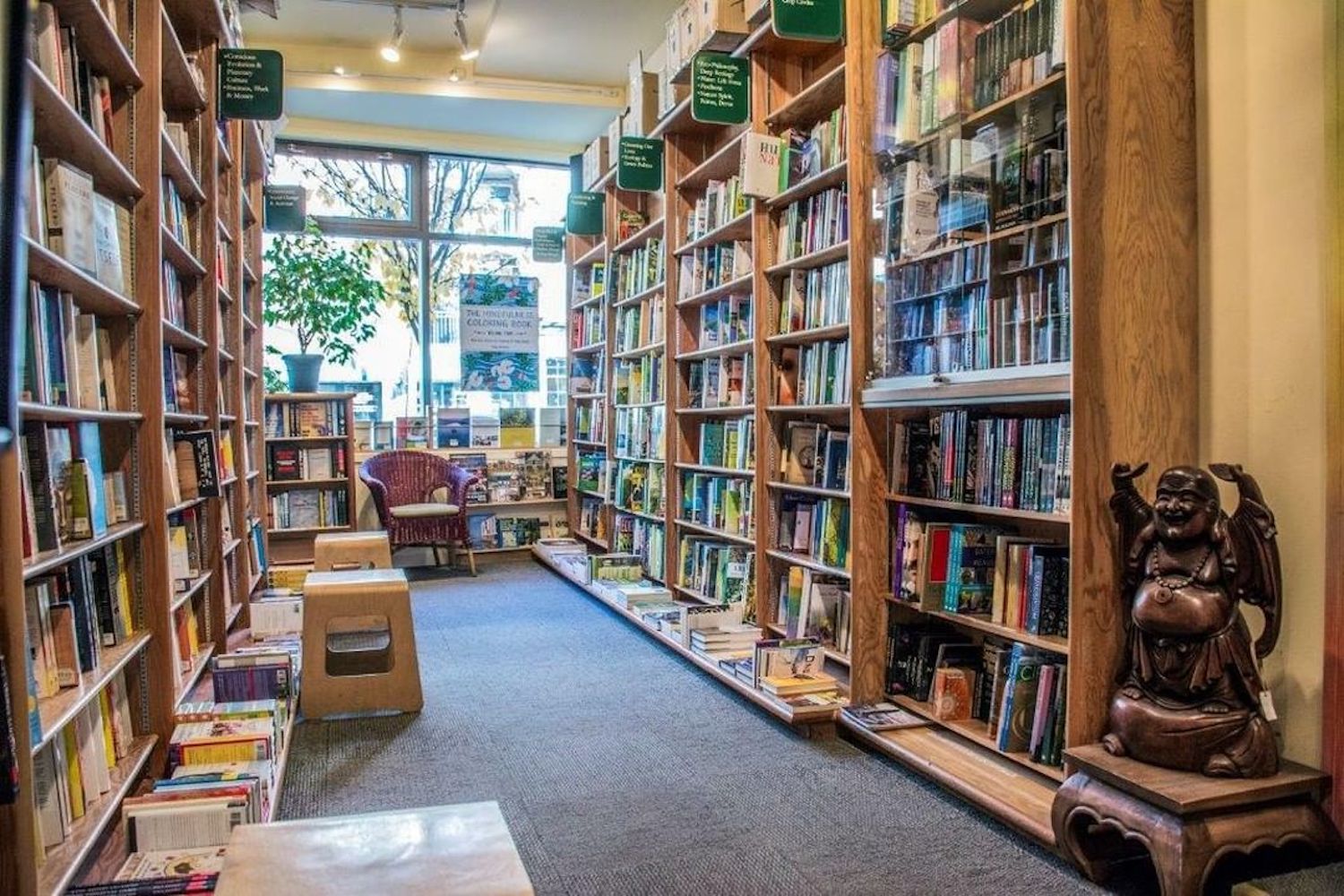 “I’m really more of a librarian,” he muses. His voice tapers off. This is not a man who likes to sound off. He’s rarely found in the front of the store, chatting up the clientele. A far cry from a business mogul, this is someone who sent his kids to Waldorf School and got into the book business during the heydays of counter-culturalism, beginning as a books-and-natural-foods-corner in the Golden Lotus Restaurant at Fourth and Bayswater in 1969.

Then he split. He did the India thing. He was interested in meditation. Learning. Healing. He started keeping a list of important books about spiritual enlightenment. Upon his return to Kitsilano, at age 21 he opened the first Banyen Bookshop with $1,500 and 10 boxes of books, most of which were acquired from Bookpeople, a co-operatively-owned wholesaler in Berkeley, California. It was the tail end of the Peace and Love era. In early 1971, he took a leap of faith and ordered 150 copies of Be Here Now, a still-popular New Age bible for enlightenment-lite by Western spirituality teacher and yogi Ram Dass, who became a friend and mentor.

The rest is post-hippie history: fifty years of five store locations and enviable stability in a notoriously difficult trade. Owning his own premises since 2003, Lymworth outlasted the Duthie Books empire and remains imperviously in contrast to the Toronto-based behemoth, Chapters (now continuing their record of rapaciousness by being dreadfully slow paying many of Canada’s independent book publishers during the pandemic). 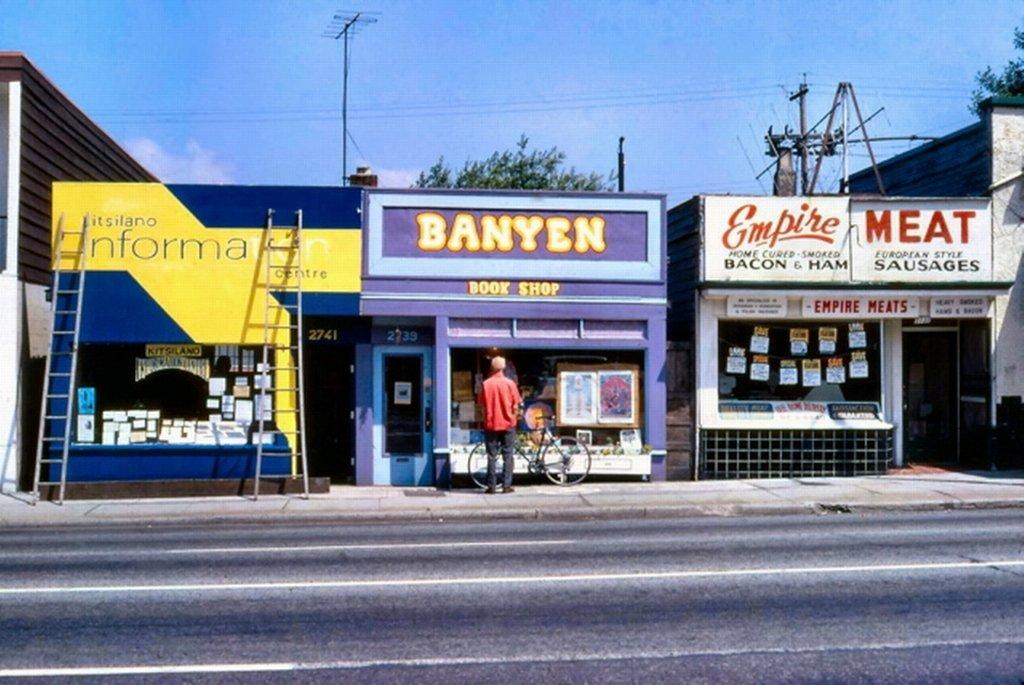 Along with antiquarian generalist and genius, Don Stewart of Macleod’s Books, who is also nearing the 50-year mark as a bookseller, Lymworth can be now be viewed—by anyone who wants to stop and think about such things—as a cultural hero. As Covid 19 pushes us back into the Dark Ages and further forward into the Digital Ages, the twin outposts of sanity and learning that are Macleod’s Books on West Pender and Banyen Books on West Fourth are like public monasteries that preserve wisdom and civilization.

To mark his 50 years in “the biz,” Lymworth hopes to compile and “glorify” a complete list of the hundreds of people who have worked at Banyen Books since 1970. The future is not gloom ‘n’ doom.

“In the midst of this extended pandemic moment in human evolution,” he says, “more people are avidly reading and really studying.

“I’m gratified and excited to help more and more folks widen, deepen and brighten their horizons through reading-reflection, and now through our online author and teaching events, as well.

“While outer travel is largely gone for most of us, inner exploration and embodied learning is alive and flourishing — and important — as we gear up for the hard work ahead.

“We at Banyen are stoked to help (in our bookstorely way) all us humans to upgrade our nature-and-heart-based operating systems. We and the books are still here.”

[It’s the independent bookstores in the U.S. and Canada that have kept the book industry alive during the pandemic. Banyen is representative of a prevailing spirit of community service that motivates a vibrant network of “indie” outlets around B.C. We know we they are — and we are grateful for their perseverance. – Ed.] 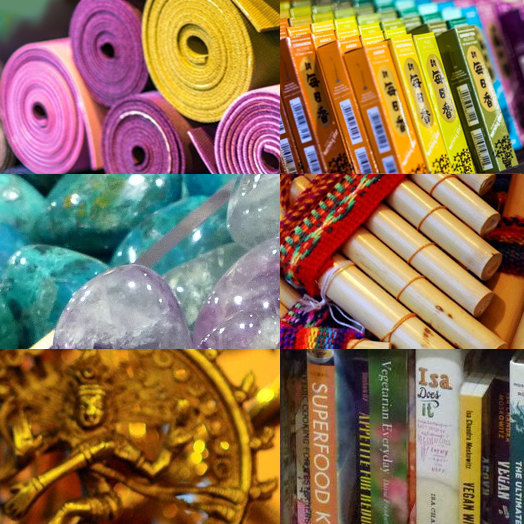