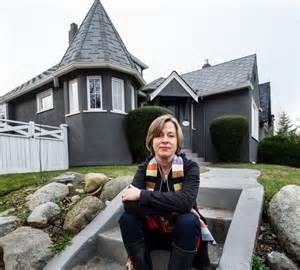 The average lifespan of a house in Vancouver is becoming less than a human lifespan.

Spearheaded by Caroline Adderson, Vancouver Vanishes: Narratives of Demolition and Revival (Anvil $32.95) is a shared attempt to document and protest the rampant destruction of perfectly fine family dwellings in Vancouver for no reason other than speculative profit.

Between 2004 and 2015, more than 10,000 demolition permits were issued for residential buildings in the city of Vancouver. As of 2015, an average of three houses were being torn down per day. Many of these homes were built for the middle and working class in the 1920s, ’30s and ’40s.

Although these “disappeared” houses are not deemed significant enough to merit heritage protection, Adderson and others believe their removal amounts to an architectural loss—and much more.

As a novelist, Adderson [at right, Steve Bosch photo] contends suburban renewal is tantamount to a loss of shared narratives. Even if that perspective seems a tad airy-fairy to you—Hey, don’t those new mega-houses, often owned by folks from afar, constitute the growth of new stories in other languages?—it’s a lot more difficult to debunk her contention that wide-scale destruction of wooden houses is antithetical to the conceit of Vancouver City council to make Vancouver into the greenest city on the planet. Caroline Adderson. And you don’t believe we’re on the eve of destruction. Bruce Sweeney photo.

No matter how many miles of prescribed bike lanes that effete and self-serving city planners can allocate on a map in order to compete with Copenhagen and Amsterdam—whether cyclists are actually using Cornwall in Point Grey or not—it’s pretty hard to condone widespread domestic demolitions from an environmental perspective.

Heartfelt and smart contributions have been made to Vancouver Vanishes from the likes of heritage-meister Michael Kluckner—who wrote Vancouver The Way it Was way back in 1984—as well as Vancouver Sun mainstays John Mackie and Kerry Gold, heritage honcho John Atkin, poet Evelyn Lau and the increasingly pervasive and essential Eve Lazarus who concludes, not without a whiff of anger:

“Legg House, an Arts and Crafts house built in 1899, managed to hang on all the way until June 2014 with heritage A status on the city’s Heritage Register. That should have been enough to save it from demolition. It wasn’t.

“The house’s century-plus solid old bones lost when the public decided it would rather save a massive old tulip tree on the site. Legg House was demolished in June 2014.” Redevelopment can’t be stopped. Memory must be erased. Developers have co-opted the word development. We must become world class and vapid. Give us thy $8 loaf of bread with ‘farm-to-table’ self-righteousness, over-priced Canucks tickets and huge vehicles that half of the drivers can’t park. Try to stop it? Ha. Go ahead, make my bulldozer. THIS is what Vancouver is all about. Profit.

The aforementioned Michael Kluckner has been trying to blow the whistle for thirty years. In 1990, he published Vanishing Vancouver, followed by Vanishing British Columbia in 2005 and Vancouver Remembered in 2006.

Roland Morgan, a Georgia Straight editor who exiled himself back to London where he continued to live by his wits, beat Kluckner to the punch with Vancouver: Then and Now (Whitecap 1983), arguably the first book to alert the Vancouver populace to its own loss of architectural memory.

[This book was launched at  BOOK WAREHOUSE, 4118 Main Street, Vancouver on MONDAY, NOVEMBER 23 at 7 PM with a discussion hosted by CAROLINE ADDERSON.]