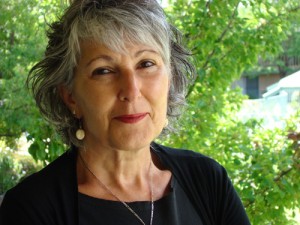 The awards ceremony, attended by some 320 invited guests, was held in the Fermenting Cellar in The Distillery Historic District. Scott Griffin, founder of the prize, and trustees Mark Doty, Carolyn Forché, Marek Kazmierski, Jo Shapcott, Karen Solie, Ian Williams and David Young hosted the event where the guests enjoyed readings by Nicole Brossard, The Griffin Trust For Excellence In Poetry’s 2019 Lifetime Recognition Award recipient, and a recitation of the poem “Star Gazer” by Dominique Christina, by Catricia Hiebert, a 2019 national winner of Poetry In Voice/Les voix de la poésie. The judges for the 2019 Griffin Poetry Prize were Ulrikka Gernes (Denmark), Kim Maltman (Canada) and Srikanth Reddy (US). 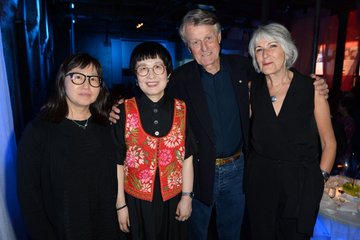 Scott Griffin with the international prize winners Don Mee Choi and Kim Hyesoon for their Autobiography of Death and the Canadian winner Eve Joseph for Quarrels.

Here is the judges’ citation: “In Quarrels, Eve Joseph’s delightful collection of prose poems, you enter the marvelous and that is the truth! The poet has surrendered herself to the realm of the illogical, trusting that it has a logic of its own, and the outcome is, indeed, a new music. These poems are intriguing spaces and moments defeating the boundaries of the real, but rest assured, Joseph leads you by the hand with warmth, wit and empathy.

“Perhaps these poems are crystallisations of a deeply human, spiritual knowledge, gathered over decades working in a hospice. Joseph’s previous book, the exceptional memoir, In the Slender Margin, renders this experience. Certainly, without gravity, poems wouldn’t be able to sing. As distillations of life, these poems, with beauty and charm, hold their own credibility: an omnipresent, merely-in-glimpses-tangible marvelousness, miraculously fastened to the pages of a single slender volume that will fit into most pockets and assure magnificent company on any given journey.”

While working at the Victoria Hospice, Eve Joseph of Brentwood Bay previously published a series of variations on the Persian literary form of the ghazal, The Startled Heart (Oolichan, 2004). This debut collection marries the spiritual and physical worlds as Joseph explores grief and loss and the process of dying. It was shortlisted for the Dorothy Livesay Prize.

Her second collection The Secret Signature of Things (Brick 2010) evokes and explores the process of attaining epiphanies. It was also nominated for the Dorothy Livesay Poetry Prize. In a long poem called ‘Tracking’ she struggles with the question of how to remember many missing aboriginal women on the West Coast.

In the Slender Margin (HarperCollins $21.99), Joseph’s third book, is part memoir, part meditation on death. The early demise of her brother coupled with twenty years of work at a hospice give Joseph ‘an insider’s point of view’. Using history, pop culture, religion, literature, mythology, poetry and references ranging from Joan Didion, Susan Sontag, and D.H. Lawrence to Voltaire, Joseph writes about the mysterious and at times horrendous aspect of what she has observed of this life stage.

Born in 1953, Eve Joseph grew up in North Vancouver. As a young woman she worked on freighters and travelled widely, then received an M.A. in Counseling Psychology. She has been nominated for many awards, including a National Magazine Award and the City of Victoria Butler Book Prize. Her non-fiction has been shortlisted for the CBC Literary Awards and she received the P.K Page Founder’s Award for Poetry. 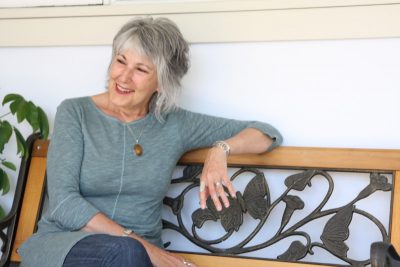 That quotation at the outset of Eve Joseph’s Quarrels leads us into short prose-poems about the conflicts within herself. She focuses on moments when she must vindicate the coexistence of the infinite and the finite.

Part one of Quarrels is a series of meditations. Part two reflects upon the photography of Diane Arbus. Part three is an extended sequence that engages with the death of her father.

Ultimately, death is one of the themes that links all three parts. Joseph’s parents make frequent appearances in the early poems.

Along the way, Joseph frequently includes references to the ocean, such as her room with a view, or Demosthenes shouting at the sea with pebbles in his mouth.

There are many birds throughout and also plenty of booze (wine, rum, gin) that is shared during visits from a plethora of artists and mythical figures, from Aeschylus to Al Purdy.

A quote from American cultural critic Joan Acocella fittingly opens one section of the book, but helps with our receptivity to all of it:
“The goal of art was not the truth but the marvelous —indeed the marvelous was the truth.”

Like lotus blossoms, these poems open from a central image into something seemingly limitless as Joseph “quarrels” with the infinite complexity of life. Or, as poet Jack Spicer once confessed, “I am thinking that a poem could go on forever.”

Truth is not set in stone but left to the reader to construct and decide upon. One particularly exquisite example starts as “Light stutters down the closed blinds and builds a spine, one vertebrae at a time.” This blind is transformed into “a door that could open but remains closed.”

Joseph’s explorations of the minutiae of life are vital. “The trick is to return to the moment. To smell the butts in the ashtray, the air freshener dangling from the mirror. Stairway to Heaven was playing on the radio. God arms himself with his smallest creations.”

The final chapter is the payoff as Joseph takes the same approach to capturing moments she shares with her father, connected by the inescapable fact that they are his last. This concluding chapter reveals the height of her prowess for observation and reflection. For all the talk of eternity, there is still a hollow Hallelujah.

Joseph wonderfully ends Quarrels by retelling the events of her father’s death to his horses, and recognizing the catharsis in the moment when “their long heads bow in consolation.”

Paul Falardeau is a poet, essayist and journalist who has published in The Ormsby Review, Pacific Rim Review of Books, and subTerrain. He lives in Hastings-Sunrise, East Vancouver.

You can hear Eve Joseph read from her prize winning collection here: