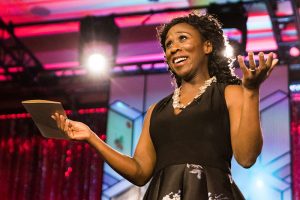 Esi Edugyan has won the Scotiabank Giller Prize for her novel Washington Black.

As anyone who listens to CBC knows–from hearing it over and over–Esi Edugyan is the winner of this year’s $100,000 Scotiabank Giller Prize for her novel Washington Black, published by Patrick Crean Editions.

It is hard to keep up with her successes. Washington Black, her third novel—about a slave in Barbados who escapes to Nova Scotia, Labrador and Europe—has also been shortlisted for the Man Booker Prize and the Rogers Writers’ Trust Fiction Prize.

The Giller announcement was made at an award ceremony hosted by Canadian comedian, television personality and author Rick Mercer and attended by nearly 500 members of the publishing, media and arts communities.

Here is a review of the novel as it appeared in BC BookWorld prior to the black-tie dinner.

In her two previous novels, Esi Edugyan has described black men of exceptional talent struggling against the annihilating forces of racism in the 20th century. Once again, she writes from the point of view of a man (one of relatively few female authors to do so consistently) using his narrative voice. Washington Black’s speech evolves from that of an enslaved child to that of a young man capable of astute observations and poetic eloquence. But this time her episodic story is wide in scope, full of action and panoramic in its geographical range.

It is a mark of Edugyan’s versatility that her latest novel is a complete departure in form from The Second Life of Samuel Tyne (Knopf, 2004), about a man from Ghana who raises his family in Alberta; and Half-Blood Blues (Thomas Allen, 2011), about black jazz musicians in Berlin during the late 1930s. Setting Washington Black in the 1800s, she adapts the sprawling, capacious 19th century novel to her purpose. That century is notable for its great scientists and explorers. In Washington Black she emphasizes throughout, the contradiction between their increased knowledge of the natural world and their blindness to the suffering of most of its human population.
In the story, fictional men of science (vaguely reminiscent of Darwin, Franklin and Gosse) react incredulously to Washington Black’s achievements. Wash says of one of them, “I felt as if he were watching some insensible creature perform an unnatural act, as if a hot house plant had learned to speak.” 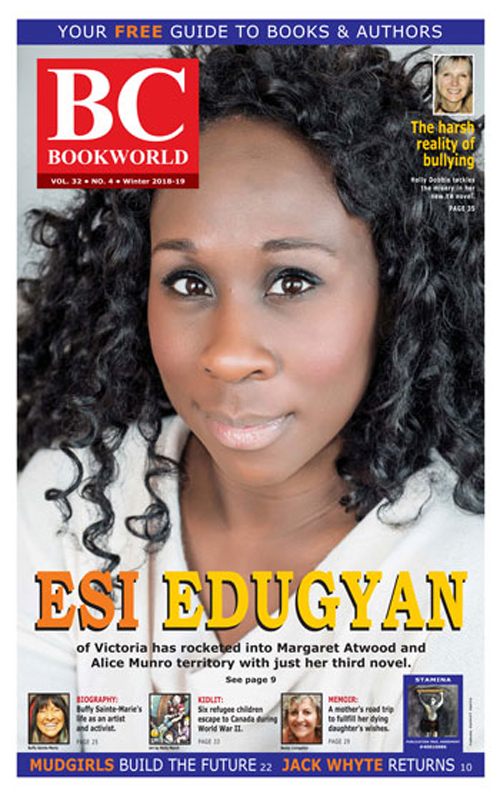 Edugyan’s large cast of idiosyncratic characters includes Wash’s nemesis, John Willard, a soft-spoken villain whose impeccable manners belie his ruthlessness as a bounty hunter; identical twins Benedikt and Theo Kinast, the captain and the surgeon of the Ave Maria with a crew of rescued orphans; Edgar Farrow, the sexton of St. John’s parish in Norfolk, Virginia, who studies rotting human flesh, and smuggles runaway slaves to safety; and Peter Haas, a Dutch mute who speaks with his hands.

Most closely entwined with Wash’s destiny is the Wilde family. Besides the savage Erasmus and the abolitionist Titch, it includes the patriarch James, an arctic explorer unwilling to communicate with his fellow men; his eccentric wife back at the family estate in England and a cousin, Philip, who visits the Faith plantation. It is Philip who seals Wash’s fate in Barbados.

It is giving too much away to describe how and why an F is branded onto our protagonist’s chest, or why there is a huge reward for his capture. Or how Titch engineers his escape. Or why Wash rejects his chance for freedom in Upper Canada and instead accompanies Titch to Hudson’s Bay. Eventually our hero reaches Nova Scotia in 1834 where slaves are technically free. The Slavery Abolition Act applies to British Colonies.

The evil of racism persists in men such as John Willard who rails against the steam engine and extols a “natural order” that justifies one race dominating all others. As Titch once explained to Wash, “Freedom… is a word with different meanings to different people.” Gradually, we participate in the emergence of Wash’s understanding that abolition has not resulted in liberation:

…there could be no belonging for a creature such as myself, anywhere: a disfigured black boy with a scientific turn of mind and a talent on canvas, running, always running, from the dimmest of shadows.

On the shores of Labrador, after a fortuitous meeting with a distinguished marine biologist and his daughter, Wash becomes a deep sea diver, bringing to the surface rare sea creatures, and even designing the glass tanks in which they can be displayed alive. The crowning achievement of his life is the creation of Ocean House in London, a gallery of aquatic life.

As the story unfolds, Wash will witness the gruesome death of John Willard and embark on a quest to discover if Titch is still alive, but his major contribution to Ocean House will not be acknowledged, his name will be erased from the record. With much dexterity, Edugyan describes how her protagonist makes sense of injustices and cruelties. While the storyline is engaging, it is her imagining of his inner self that makes this story redolent with sophistication and empathy.

An octopus provides the most resonant image for this novel. As Wash descends underwater he sees “a flaring orange creature radiating like a cloth set afire, its arms boiling all around it, the suckers very white… an animal that can change itself to match its surroundings, just by contracting its skin.”

This meeting is poignant. He imagines this sentient female creature scorning “the sad rigidity of a boy, the uselessness of his hard inflexible bones.” But the octopus inks him playfully, and looking at him with her small gelatinous eyes, she swims directly into his hands. He tends to her lovingly; he brings her to England so that others might appreciate her beauty.

Outside her natural medium, she cannot thrive. Watching her saddening decline, he sees “not the miraculous animal, but my own slow, relentless extinction.” This is a story that goes to great depths; it’s deserving of the attention it is receiving.