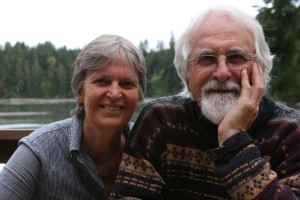 Husband-and-Wife duo have 25 gigs lined up

The public is invited to join Eriksson and Geddes for an evening of fiction and poetry as they start off their tour with a reading at the Vancouver Public Library’s Central Branch (350 West Georgia Street) on Monday, September 8, at 7pm. The event will take place in the Alma VanDusen and Peter Kaye Rooms on the library’s lower level; admission is free and all are welcome to attend.

Both members of this husband-and-wife team have released new books this year. Eriksson’s High Clear Bell of Morning (Douglas & McIntyre, $22.95) is an elegant, affecting novel about a family struggling to cope when the daughter, Ruby, develops schizophrenia. The book also draws on environmental themes through the character of Ruby’s father, a marine biologist studying the mysterious death of a killer whale on our west coast. Geddes’ What Does a House Want? (Red Hen Press, $19.95) is a collection of selected poems from his acclaimed poetic career.

Ann Eriksson is the author of three previous novels: Decomposing Maggie (Turnstone, 2003), In the Hands of Anubis (Brindle & Glass, 2009) and Falling From Grace (Brindle & Glass, 2011), which was awarded a silver medal in the 2011 Independent Publishers Book Awards. Eriksson is a biologist and a founding director of the Thetis Island Nature Conservancy. For more info, go to: www.anneriksson.ca.

Gary Geddes has written and edited more than forty books of poetry, fiction, nonfiction, drama, criticism, translation, and anthologies, and won a dozen national and international literary awards, including the Commonwealth Poetry Prize (Americas Region), and the Lieutenant Governor’s Award for Literary Excellence.

This reading event is made possible with support from the Canada Council for the Arts. For more information, please email marketing@douglas-mcintyre.com or phone the Vancouver Public Library at 604-331-3603.