London wasn't jolly for Emily Carr—far from it—but it made her into an artist. 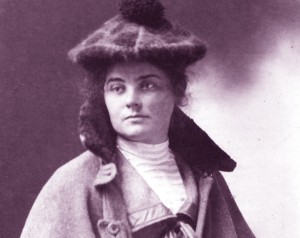 Emily Carr, seen here in 1901, was inspired to get out of Dodge.

Emily made the most of her early training in England despite acute anaemia and being interned in the East Anglia Sanatorium.

Earlier this fall, 25 Emily Carr paintings and sketches were shipped from Victoria to the UK to appear in the first major international exhibition on Emily Carr at the Dulwich Picture Gallery in London, coincidental with the release of Kathryn Bridge’s  Emily Carr in England (RBCM $27.95). It covers Carr’s sojourn to England as a budding artist, arriving in 1899, at age 27, and returning five years later.

The new book includes historical photographs, Carr’s own sketches, paintings and also her “funny books,” some of which have never been published before. One of her illustrated funny books makes fun of the guest house in which she lived; another describes an unsuccessful attempt to see Queen Victoria’s funeral procession, and a third describes a painting excursion into the woods from St. Ives, Cornwall.

While at the Westminster School of Art, Carr was keen to participate in a segregated class for female artists drawing from the nude. “I had never been taught to think of our naked bodies as something beautiful,” she wrote, “only as something indecent, something to be hidden… [The model’s] beauty delighted the artist in us. The illuminated glow of her flesh made sacred the busy hush as we worked.”

Copies of the book have been sent to Dulwich Picture Gallery in London to complement the new Carr exhibit–some 105 years after Carr left. “The five years Emily Carr spent in England at art schools have been largely forgotten or underappreciated in terms of her development as an artist and as a mature adult,” Bridge says.  “This is in part because in later life Carr did not dwell on this time, although she did write about some aspects in her book, Growing Pains…

“My motivation in writing this book was to flesh out these years and to use today’s technologies – websites and digitized archival records – to learn the true identities of people she made anonymous in her writings through the use of fictional names,” Bridge said. “I was able to make connections and decipher identities, to create a much more accurate chronology of her whereabouts and interactions, and to make connections between Carr and her peers.”

The Vancouver Art Gallery has a permanent room to show Emily Carr’s work, but it’s the Royal BC Museum in Victoria that houses the world’s largest collection of Emily Carr’s art—more than 1,100 works of art (paintings and sketches), plus rugs, pottery and archival and library records.

The youngest of five sisters, Emily Carr was born in the year British Columbia entered Confederation, on December 13, 1871. A brother was born several years later. Her mother died when she was twelve and her domineering father died in 1888 when ‘Millie’ was 14. A much detested and pious older sister made her life miserable, sometimes whipping her, until Emily Carr was able to study art in San Francisco. After returning to Victoria in 1895, she was invited by a missionary friend of her sister Lizzie to make the first of her forays into the primeval rainforests of the West Coast, visiting Ucluelet in 1899 where her sister was becoming a missionary. This trip stirred her interest in Aboriginal villages. On this trip she also gained her name from the Nuu-chah-nulth or Nootka people, ‘Klee Wyck’, meaning Laughing One.

On her return voyage to Victoria, the ship’s purser named William Locke Paddon fell in love with her–but it was “an immense love that I could neither accept [nor] return.” Partially to get beyond the persistence of her suitor, she saved enough money to continue her education in England, where she studied at the Westminster School of Art. During this period she reportedly collapsed in the fall of 1902 with acute anaemia and was interned in the East Anglia Sanatorium in Suffolk, England for health reasons that have never been adequately explained or identified. [Carr’s mysterious and possibly damaging treatments for hysteria are at the core of Margaret Hollingsworth’s novel about creativity and aging, Be Quiet (Coteau, 2003).] She was not permitted to paint for 18 months during her enforced confinement, so she kept a sketchbook that reflects her experiences in the Sunhill Sanatorium. It became the gist of a book published in 1972 entitled Pause.

Emily Carr came back to Canada in 1904 and made a six-week stopover with friends in the rugged Cariboo. “Mounted on a cow pony I roamed the land…” she wrote. “How happy I was!” She was relieved to accept an invitation to teach at the Vancouver Studio Club in 1906, escaping the conservative claustrophobia of Victoria and her family. Dissatisfied with teaching ‘society ladies’ (who included a young writer-to-be named Ethel Wilson), she rented a studio at 570 Granville Street. In the summer of 1907, Carr and her sister Alice took a cruise to Alaska where she was much impressed by the totem poles she saw during a visit to Sitka, an American naval base on Barnof Island. There she discovered an old Tlingit village where carvings remained in their original settings. “The Indian people and their art touched me deeply…” she wrote upon her return. “By the time I reached home my mind was made up. I was going to picture totem poles in their village settings and complete a collection of them as I could.”

Emily Carr’s reputation as a visual artist has somewhat overshadowed her literary accomplishments, but in 1941, the same year that Victoria-born poet Anne Marriott won a Governor General’s Award for Poetry for her collection Calling Adventurers!, Emily Carr received the Governor General’s Award for her first non-fiction book, Klee Wyck (1941). They were the first two B.C. authors to win one of the country’s top literary prizes, to be followed soon thereafter by Earle Birney and Dorothy Livesay. Emily Carr as a mature artist

At age 69, having suffered a stroke, Emily Carr began writing 21 vignettes about wildflowers, partly as a tonic while she was bed- ridden. At age 70, Carr published Klee Wyck, a collection of non-fiction pieces based on her visits to First Nations villages. She confided in her diary, “I tried to be plain, straight, simple and Indian. I wanted to be true to the places as well as to the people. I put my whole soul into them and tried to avoid sentimentality. I went down deep into myself.”

Carr had enrolled in a short story writing correspondence course in 1926 and taken a similar course at Humber College in 1934. She also benefited from the friendship of Garnett Sedgewick, head of UBC’s English Department, and Ira Dilworth, regional head of the CBC, both of whom read her stories on the radio. Dilworth was her editor and later served as her literary executor. Despite a 20-year-age difference—or perhaps because of it—they were able to sign their many letters to one another “with love.” Carr confessed some of her most private feelings to him and sometimes playfully referred to him as “My Beloved Guardian.”

Encouraged by critical acclaim for Klee Wyck, Carr continued to write memoirs and stories. Her other books include The Book of Small (1942), The House of All Sorts (1944) and various posthumous titles, such as Growing Pains (1946).

Although she preferred not to discuss her work, it is evident Carr was a more sophisticated writer than she cared to admit. She once commented, “I did not know book rules. I made two for myself. They were about the same as the principles I use in painting—get to the point as directly as you can; never use a big word if a little one will do.” As a philosophical artist, Carr was very quotable on a variety of topics such as Canada, ageing and her own work. She once wrote, “It is wonderful to feel the grandness of Canada in the raw, not because she is Canada but because she’s something sublime that you were born into, some great rugged power that you are a part of.” As for ageing, she wrote, “It is not all bad, this getting old, ripening. After the fruit has got its growth it should juice up and mellow. God forbid I should live long enough to ferment and rot and fall to the ground in a squash.”

Carr’s dual adeptness at writing and painting once prompted George Woodcock to comment, “She would have made a good sister for William Blake.”

Emily Carr in England is on sale now at bookstores and online at the Royal BC Museum Shop at https://royalbcmuseum.bc.ca/shop/product/emily-carr-in-england/