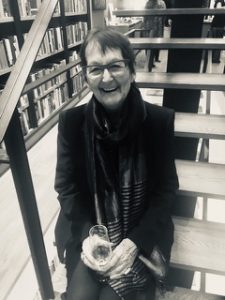 Prudence Emery of Victoria was born in Nanaimo in the 1936. After working for five years as a press secretary for the Savoy Hotel in London–and getting a kiss from Paul McCartney–she became a Hollywood publicist working with the likes of Jodie Foster, Beau Bridges, Rob Lowe, Peter O’Toole and Canadians Raymond Burr and David Cronenberg. She has 80 credits as a unit publicist on IMBD. At age 82, she will publish her memoirs, Nanaimo Girl (Cormorant 2019), forthcoming in the fall. $24.95 978-1-77086-527-3. Prudence Emery graduated from Crofton House Private School in Vancouver, B.C. in 1954 and attended UBC for two years before taking a secretarial job at the Naval base in Esquimalt. She earned enough to attend the Chelsea School of Art in London in 1957. She returned to Canada in 1962 at age 25 and taught handicrafts to veterans at Shaughnessy Hospital in Vancouver for a summer, then took a year of teacher’s training in Victoria before heading to Toronto where she worked as scab proof reader during a strike at The Globe and Mail from 1965-1966. Her breakthrough as a publicist occurred at Expo 67 in Montreal where she oversaw tours for travel writers and celebrities including Liberace, Twiggy, Hugh Hefner and Edward Albee. In 1968 she returned to London for a month’s visit and was offered a job as Press and Public Relations Officer at the Savoy Hotel. For five years she met celebrities and politicians such as Prime Minister Pierre Elliott Trudeau, Petula Clark, Louis Armstrong, Sir Laurence Olivier, Marlene Dietrich, Liza Minnelli and Ginger Rogers. She returned to Toronto in 1973 and began working as a publicist for more than 100 film productions, travelling all over the globe in the process, meeting actors such as Sofia Loren, Julianne Moore, Matt Damon, Robin Williams, Ben Affleck, Viggo Mortensen, Jenifer Aniston, Jennifer Lopez, Robert Redford and Jeremy Irons. She has worked for ten films directed by David Cronenberg. In 2014, at age 78, she wrote and produced the short comedy Hattie’s Heist.