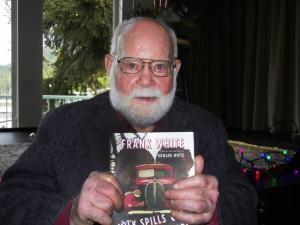 Frank White on achieving notoriety: "It was the easiest thing I ever did. All I had to do was wait.”

Frank White, pioneer, raconteur and author of bestselling books, has died at his home in Garden Bay, B.C. on the Sunshine Coast.

Frank White could claim to be the province’s oldest active author when he published his memoir That Went by Fast at the age of 100 in 2014, a follow-up to his 2013 bestseller Milk Spills and One-Log Loads.

A workingman and small businessman who didn’t retire until age 80, White wrote about his long life in a colloquial, unvarnished style that got his books onto the B.C. Bestseller Lists. They are still popular on the BC Ferries newsstands. White’s trademark was his self-deprecating humour.

“I’d got used to thinking my life hadn’t amounted to much,” he wrote, “and it seemed most people agreed with me on that. Now it’s, ‘Oh, you rode in a horse and buggy? You worked on a steam donkey show? Your girlfriend was a flapper?…You should write a book!’ By hanging around so long it seems I have become an object of historical interest.”

His was a typical life for a British Columbian of his time, comprised mostly of endless hard work, although on the evidence of his stories it was seldom dull. He grew up in Abbotsford the son of the town butcher and at age eight began serving customers in his father’s shop by standing on a butter box so he could see over the counter. His father bought the first Model-T delivery truck in Abbotsford but couldn’t get the hang of the horseless carriage so young Frankie taught himself to operate it, lying about his age to get his driver’s licence at age 13. “By the age of 13 I already had two professions: butcher and truck driver,” he wrote.

He built on his early start to follow the trucking boom that hit BC in the 1930s and 1940s, pioneering highway freighting then truck logging. In the 1950s he became a small-scale “gyppo” logger before moving to the coastal fishing village of Pender Harbour, where he operated an excavating business, a gas station and a municipal water system.

At age 92 he married the former New Yorker writer Edith Iglauer, 89, and they continued to live in their small waterfront cottage in Pender Harbour until the present. He died peacefully with his family and caregivers around him and his sense of humour intact. In his final hours when a nurse asked him how he was, he whispered between gasps, “Hundred per cent!” White was bemused by his longevity and the celebrity that came with it. “When I was fifty and still had most of my marbles,” he wrote, “all people wanted me to tell them was why their car stalled at the intersection. Now that everything is starting to get hazy, they’re not satisfied unless I can tell them the meaning of life.”

On that score he wasn’t venturing any great pronouncements. “Life is life. It’s not under our control and it doesn’t follow any script. It just is.” He might have added, life goes a lot easier if you have a good sense of humour.

Franklin Wetmore White was born May 9, 1914 in Sumas, Washington. He leaves behind his wife Edith Iglauer, a daughter Marilyn, two sons Howard and Donald, six grandchildren and eight great-grandchildren. He died on October 18, 2015.

“For a good part of my life I had the sense of being a little behind the times, then completely out of date, but by hanging on as long as I have it seems I’ve gone right off the scale and become an object of historical interest. And, you know? It was the easiest thing I ever did. All I had to do was wait.”

Frank White’s first book appeared on the BC Bestseller List in January of 2014.

According to publicity materials at the time: “Harbour Publishing is sometimes teased for the high average age of its authors, many of whom are west coast pioneers writing memoirs late in life. The champ until now was Rex Terpening, who wrote the bestselling Bent Props and Blow Pots at age 90, but this week he was deposed by pioneer truck logger Frank White, who breaks into print with his first book at the tender age of 99!… A joint reading by Howard White and Frank Write to launch Frank White’s second book, That Went By Fast.

“Frank White started writing the story of his life as a pioneer BC truck driver in 1974 when he was only sixty. His boisterous yarn in Raincoast Chronicles about wrangling tiny trucks overloaded with huge logs down steep mountains with no brakes won the Canadian Media Club award for Best Magazine Feature and was reprinted so many times everyone urged him to write more. He started in his spare time but kept having so many new adventures he didn’t finish until this year—his hundredth under heaven (which he doesn’t believe in). Although Frank set out to tell the story of his life in transportation, starting in the horse and buggy age and chronicling the growth of trucking in the BC freighting and logging industries, Milk Spills and One-Log Loads is much more than that: this is a vivid account of life as working people lived it on Canada’s west coast during the rough-and-tumble years of the early twentieth century.”

Both of Frank White’s books were edited with the assistance of Howard White, his son and publisher, who performed a similar role for the three bestselling classics of B.C. literature by inventor, entrepreneur, artist and airline owner Jim Spilsbury.

Review of Frank White’s work by BC Studies:
Milk Spills and One-Log Loads: Memories of a Pioneer Truck Driver