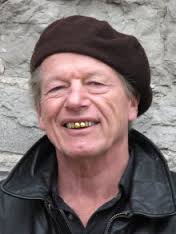 Just in case anyone is counting, Jim Christy has just published his 32nd book since 1972, The Big Thirst and other Doggone Poems (Ekstasis $23.95). Always in search of original characters and experiences, Jim Christy is a literary vagabond with few peers. He was once described by George Woodcock as ‘one of the last unpurged North American anarchistic romantics’. His publisher has called him a hip Indiana Jones; one reviewer credited him with a ‘Gary Cooper-like presence’. His buddies have included hobos, jazz musicians, boxers, and non-academic writers such as Charles Bukowski, Peter Trower and Joe Ferone. “I never dismiss another’s story out of hand,” he writes, “no matter what it’s about or how outrageous it may seem.” Christy’s often wry reminiscences of his travels, trysts and trials are fueled by a hard-won pride. A gardener, a sculptor and a spoken word performer with a jazz/blues ensemble, Christy has been seen in film and television productions, usually in non-speaking roles as a thug or a gangster. Born in Richmond, Virginia on July 14, 1945, Jim Christy grew up in South Philadelphia, a tough area featured in his autobiographical novel Streethearts, and also featured in Sylvester Stallone’s Rocky movies. “Boxing was in the air,” he once recalled. “You knew people who had boxed; if Dickens had been around he would have written about boxing.” Christy later wrote about boxing as a business and a sub-culture, in Flesh & Blood. 978-1-77171-073-2