Ormsby #120 Down Under therapy

A sixteen-year-old overcomes grief after the death of his sister with Down Syndrome. 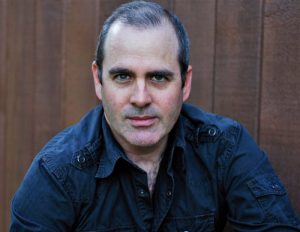 After coming to B.C. in 2007 with his Canadian wife and their five-year-old twins, Darren Groth has followed his acclaimed Do You See Me? with Munro vs. The Coyote.

REVIEW: Munro vs. The Coyote

Since the sudden death of his sister, sixteen-year old Munro Maddux has been angry, depressed, and confused. Even worse, he can’t get rid of a horrible voice in his head — the one he calls “The Coyote.”

Every time Munro takes a step toward healing his broken heart, Coyote is there to tell him not to bother. After all, he’s really just a loser. And let’s face it: he’s partly to blame for Evie’s death. Grief-stricken, and at a loss as to how to help their son, Munro’s parents decide to send him on a six-month student exchange to Brisbane, Australia, hoping a change might do him good. Munro isn’t exactly thrilled. The name of the program is YOLO and its pamphlet is chock-full of ALL-CAPS text and too many exclamation marks!

But soon after the plane lands in Australia, Munro begins to settle in. His host family is pretty cool, and he quickly makes friends with a group of kids at his new school, including Caro, whose eyes are big and wide. Her mouth always looks ready to break out in a smile, even when its filled with ramen noodles.

But as soon as things begin to show signs of improvement, The Coyote shows up, doing his best to alienate Munro from his new friends. To make matters worse, Munro learns there is a volunteer component of his exchange experience — one that will see him working as a “Living Partner” to a group of special needs residents at the Fair Go Community Village in Brisbane.

Evie had Down Syndrome, and this is just a little bit too close to home.

Then Munro discovers that Fair Go is the one place where The Coyote actually keeps his mouth shut. Maybe this isn’t going to be so bad after all. In fact, it’s kind of great. Munro soon makes solid connections with his group of residents, including Blake, a Down Syndrome girl with a spirit almost as bright as Evie’s had been. As his volunteer hours grow, Munro finds himself spending more and more time with his Fair Go group. He is especially determined to connect with Shah, a group member who managed to escape the atrocities of civil war in the Middle East in the back of a truck, only to become separated from his family.

Shah is distant and guarded, but to his delight, Munro slowly earns the boy’s trust through brief conversations they share over a chessboard. Only when two members of Munro’s group suddenly leave Fair Go does Munro’s old nemesis, The Coyote, makes a return. Munro suffers a setback. What was he thinking? He should have known this was all a mistake.

Munro lets down two members of his group, just the way he let down Evie. He couldn’t save her, and he can’t fix things for Blake and Shah, either. He’s useless, according to The Coyote, and the sooner he realizes it, the better.

The way out is to begin to trust the people around him — the people who want to help him find the old Munro again. With loving support and a strength he didn’t know he had, Munro learns that often the best thing you can do when you’re down is to get out of your own head and help someone else.

Obviously Australian ex-pat Darren Groth of Vancouver has spent considerable time in the company of young people. The dialogue between the teens is both engaging and completely authentic, a feat sometimes difficult for grown-ups to pull off. The story moves quickly and we meet a host of characters along the way. I fell in love with the members of Munro’s Fair Go group, all of them delightfully unique, while the adults who pepper the pages of the story are also wonderfully human.

In addition to some laugh-out-loud humour, this page-turner has some heart-wrenching moments, but the sentiment is never sloppy or gratuitous. While Munro vs. the Coyote is a book about loss, grief, despair, and the messiness of a sixteen-year-old’s broken heart, ultimately it is an account of healing. It is a richly layered book about love, the tenacity of the human spirit, and our capacity to mend.

Darren Groth is a brilliant storyteller and readers will recognize the nagging voice of The Coyote — that alter-ego naysayer so many of us come up against during challenging times, and younger readers will certainly enjoy the growing romance that develops between Munro and the lovely Caro.

This book was a delight to review.

Carol Anne Shaw is the author of the acclaimed “Hannah” books, all from Ronsdale Press: Hannah & the Spindle Whorl (2010), Hannah & the Salish Sea (2013), and Hannah & the Wild Woods (2015). She lives at Cobble Hill on Vancouver Island. See http://www.carolanneshaw.com/

2 Responses to “Ormsby #120 Down Under therapy”