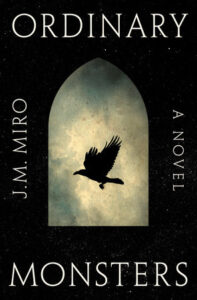 New historical fantasy, Ordinary Monsters (McClelland & Stewart $39.95 hc) by J. M. Miro, to be released this June, treads into Charles Dickens’s territory but with a twist. Partly set in Victorian London in the year 1882, the main characters are two children with special powers who are stalked by a mysterious eminence: a man made of smoke.

There’s sixteen-year-old Charlie Ovid, who despite a brutal childhood in Mississippi, doesn’t have a scar on him. His body heals itself, whether he wants it to or not. The other main protagonist is Marlowe, a foundling from a railway freight car, who glows with a strange bluish light. His power is the ability to melt or mend flesh.

A detective arrives to move Charlie and Marlowe to safety. The journey takes the three from the gaslit streets of London, to the wooden theatres of Meiji-era Tokyo, to a haunted estate near Edinburgh where other children with strange gifts are gathered; collectively they are called the “Talents.” At the estate, the Talents will learn things about themselves and the strange creature that is stalking them. Surprises await because scary monsters sometimes bear gifts.

It’s a new and different vision of the Victorian world.

J.M. Miro is a pseudonym for a lauded BC author who lives and writes in the Pacific North West. He’s using this name to keep the very different sides of his writing life distinct. Let the guessing begin!