A prolific B.C. writer has taken radical measures to outdo Vincent van Gogh, the famous painter who sold only one work of art during his lifetime. 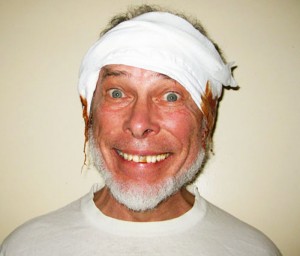 Praise has gone to the head of Nelson-based novelist Ernest Hekkanen.

Being compared to van Gogh in the Spring issue of BC BookWorld has proven hazardous for do-it-yourselfer Ernest Hekkanen, who was recently lauded in a review for his under-appreciated genius.

The review of Ernest Hekkanen‘s novella, I’m Not You, has inspired the Nelson art gallery operator to imitate the Dutch eccentric by cutting off not only one, but both ears.

“I thought I should at least try to outdo good, old Vincent in one area of my life,” he told doctors at the Daly Pavilion, the mental health wing of the Trail Regional Hospital.

His wife Margrith Schraner told the medical staff, “Quite simply, the praise went straight to his head.”

Ernest Hekkanen nonetheless hopes to be released from hospital in enough time to participate in Nelson’s Elephant Mountain Literary Festival, July 10-11, where he will speak on the creative process.

As an author of more than forty titles, Hekkanen recently voiced some of his thoughts on the creative process in the following essay called “Dysnarrativia” that appeared at the outset of his self-published literary periodical, New Orphic Review.

For the past six months, I’ve been working on a collection entitled False Memories and Other Likely Tales, a book that will go to print around the same time as the Spring, 2015 issue of this magazine. Writing it has meant having to recall the landscape of my youth, which I’ve come to think of as a good exercise for the aging brain. But, as I say in the preface to the collection, the terrain of my childhood has changed quite considerably, so much so that the present-day geography has turned the geography of the past into fiction.

I’m one of those writers who has never found it fruitful to keep a journal. I have tried—several times—with poor results! As soon as I apply pen to paper I feel as though I’m fudging, as though I’m fictionalizing my life. My day-to-day existence is so ordinary in its dimensions, I either give up keeping a journal or the details get reworked into pieces of fiction. To tell the truth, I think I’d rather spend my time in the landscape of my imagination than in the real world, a malady I’ve suffered from since early boyhood.

Margrith Schraner, the Associate Editor of The New Orphic Review, frequently reads books devoted to the craft of writing, and now and then, while we’re having our morning coffee, she will read aloud passages she thinks might be of interest to me, because I never read such books, myself. During the fall of last year, she brought to my attention a condition known as dysnarrativia. Instantly I fell in love with the malady. The way it rolled off the tongue was so sensuous: dys-nar-ra-tiv-ia.

Dysnarrativia is a condition applied to people who suffer from various states of narrative impairment, due to brain injury or pathological deterioration affecting several neural network components. In the abstract to The Neurology of Narrative, Kay Young and Jeffrey L. Saver contend that “individuals who have lost the ability to construct narrative have lost their selves.”

This gave me cause to ponder.

When I finish a writing project, be it a novel or a short story, I often feel at loose ends. Agitated. Depressed. Directionless. I tap around in the dark with my mental Seeing Eye cane until I bump up against a line, a smell or an image that results in the unfolding of another narrative, and then I feel alright. Well, most of the time, anyway. My Associate Editor and I were shopping in the local Safeway not long ago. A flyer had advertised a fantastic deal on heads of lettuce and, during the long months of winter, in Nelson, a good, inexpensive lettuce is difficult to find. That was the narrative we decided to subscribe to that afternoon: obtaining a good lettuce.

By the way, during the winter, we go everywhere on foot. I tote our purchases home in a backpack. I tell myself the walk is good for my health, another narrative I subscribe to. At the Safeway, we popped two heads of lettuce into our shopping basket. Goal achieved. My Associate Editor then decided to explore the rest of the store to see if there was anything further that might catch her fancy. Around this time, we ran into several people we know and began to chat with them; this is easy to do in a small town like Nelson, population 10,000 souls. Between run-ins with friends and acquaintances, we continued our journey up and down the aisles of the grocery store, in vague pursuit of a bargain. Here, I should make an admission: I have always found it difficult to drift, to float. I don’t mind taking long, exhausting walks that lead me in an enormous circle, but I find it difficult to drift. It de-energizes me. I start feeling lethargic, immensely so. In the Safeway, I began to feel as if I were strolling an Alzheimer’s ward, aimlessly, all sorts of colorfully packaged items shouting at me from the shelves. At this point, I knew I had to get out of there—to preserve my sanity!

It dawns on me as I write this editorial that I must have lost the thread to my narrative while in the Safeway. I might as well have been wandering King Minos’ labyrinth. Any one of the grocery store aisles might have ended up with me running into the bone-crunching Minotaur—had that been the overarching narrative du jour! However, that wasn’t the narrative; the day held no such surprise. All it offered was numbing lethargy—and lettuce!

My contention in this editorial is that there might be gradations of dysnarrativia, and that people might be suffering from this condition to various degrees, even if the narrative-managing components of their brains haven’t been destroyed by injury or disease. Also, the condition known as dysnarrativia might be more widespread than the authors of The Neurology of Narrative have allowed themselves to contemplate. Dysnarrativia might even account for why young men brought up in a state of relative comfort in the West have become warriors in the fight to establish an Islamic Caliphate in the Middle East.

Allow me to briefly pursue my argument.

However, what happens when these intertwining narratives fail us, or when the neural components that sort them out decide to go on strike? This happened to me in the middle to late 1960s, when the United States offered me the chance to fight in the Vietnam War. The national narrative, which was based on the domino theory that communism would arrive on the shores of California if it wasn’t stopped in Southeast Asia, had obviously been dreamed up by a bunch of madmen who didn’t have a firm grip on reality, and it resulted in the loss of millions of lives, mostly Vietnamese lives. I became an anti-war activist and, later on, fled to Canada where I had to accommodate myself to a national narrative that wasn’t terribly dissimilar to the one that had failed me.

In The Neurology of Narrative, the authors quote Aristotle as having said: “The more isolated I become, the more I come to like stories.” I have trouble thinking of Aristotle as an isolated individual; after all, he was teacher to the rambunctious Alexander the Great. However, there is something about that quote which strikes a chord with me, and which harkens back to what I have said about feeling agitated, depressed and directionless when I’m not working on a narrative. You see, I have never found the overarching narrative of North American life all that inspiring. To simplify it, that narrative goes something like this: Get an education that will allow you to get a good job that will allow you to buy as much stuff as possible, especially after you’ve had a kid or two, and then, upon retiring, enjoy the pastures of plenty.

I found that narrative uninspiring and, to endure the brain-numbing isolation it induced in me, I came to appreciate stories—in much the same manner that Aristotle did, I would bet. I have been writing stories since my early twenties, and have clung to that activity with frightening tenacity. I don’t think it would be stretching a point to say fiction writing made it possible for me to survive 35 dead-end jobs and 45 years of near-anonymity in a country I have never fully adjusted to living in, especially after Prime Minster Pierre Elliott Trudeau left office and the country as a whole seemed to drift from pillar to post to tar sands to visionless future.

Believe it or not, this brings me to Michael Zehaf-Bibeau, the fellow who killed the soldier standing guard at the Canadian National War Memorial. I would bet anything that Bibeau was suffering from narrative failure—due in part to drug addiction, if we are to believe reports, but also because our national narrative left him feeling estranged. After earning big bucks with Labour Union Local 1611 (purportedly $5000 a month), he drifted from one homeless shelter to another until finally he ended up in Ottawa where he single-handedly carried out an armed assault on the Parliament Buildings. Not long before taking his appointment with destiny, he was denied a passport that would have allowed him a one-way trip to Syria to fight for the Islamic Caliphate, and so resorted to Plan B. Another young fellow by the name of John Maquire, who purports to have been an average, hockey-playing Canadian kid, denounced his decadent country of origin in order to fight on behalf of the Islamists. (Recent reports indicate he is now dead.) Apparently, there are at least a dozen Canadian men who have chosen to go on this adventure. If we subscribe to what Young and Saver have said in The Neurology of Narrative, it looks as though these young men might have lost the ability to construct a meaningful narrative here in North America, and so lost their selves.

Is this an acceptable way to deal with feelings of dysnarrativia? For those who aren’t capable of dealing with a lot of ambiguity, or what looks to be a visionless future, it would certainly appear to be the case.

One Response to “Deranged B.C. author cuts off both ears”