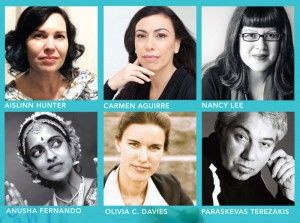 Dance is physical ephemera on a stage. Writing is squiggles on a page. The Chan Centre has instigated a new art form for both genres with Words in Motion.

On March 18-19, an experimental showcase called Words in Motion will premiere at the Telus Studio Theatre as the brainchild of Chan Centre programming manager WendyAtkinson.

“I have often thought that it would be great to see how a writer’s words would be interpreted by artists working in different genres,” says Atkinson, herself a musician with several successful CDs.

But she did not simply imagine a dancer interpreting text. Instead Atkinson wanted to see what would happen when a dance choreographer worked directly with a writer to blend their talents.

To that end, she commissioned three choreographers and paired each of them with a specific writer. The writers are Aislinn Hunter, Nancy Lee and Carmen Aguirre.

Words in Motion is a part of the Beyond Words series, an exploration of the power of words in performance. It started in 2012 with an event booked in collaboration with the UBC Creative Writing Program. “They were bringing in the musician John K. Samson from the band, The Weakerthans, to do a residency with their students. As part of the residency he was scheduled to do a performance and they approached the Chan Centre to present John with them,” says Atkinson.

That performance evolved into an event that combined a performance with a talk about Samson’s creative process. The series has subsequently included artists such as Tanya Tagaq, Shane Koyczan and Ivan Coyote–all locally-based.

Atkinson worked with BC BookWorld staff to identify writers and with Mirna Zagar, executive director at the Dance Centre, as well as Martha Carter of MartaMarta Productions, to select the choreographers.

All three authors can be described as rising stars. Aislin Hunter was recently on the cover of B.C. BookWorld for having won the Ethel Wilson Fiction Prize for her most recent novel, The World Before Us (Doubleday 2014). It concerns the disappearance of a five-year-old who is lost during a walk in the woods–and never found. The teenager in charge of her is the protagonist for the novel, haunted by the tragedy as an adult.

Newsworthy of late for demanding local theatre groups adopt diversity-orientated casting initiatives and also for having been monetarily-disadvantaged when the publishing imprint Douglas & McIntyre nearly went belly-up, Carmen Aguirre has a new memoir about her appearances as an actor in the film industry, Mexican Hooker #1: And My Other Roles Since the Revolution (Random House).

Linked to a serial killer in Vancouver, Nancy Lee’s Dead Girls (M&S, 2002), a collection of eight stories, received the 2003 VanCity Book Prize for best B.C. book pertaining to women’s issues and was named Book of the Year by NOW magazine. Her first novel, The Age (M&S 2014) is about a troubled teenaged girl.