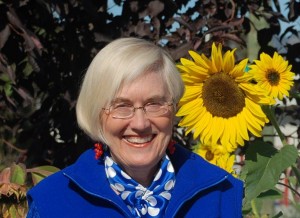 Elma Schemenauer’s Consider the Sunflowers, an historical prairie novel set in the 1940s, sweeps the reader back in time to a very specific cultural setting. Tina, a young Mennonite woman with dreams of love, gives up her Vancouver city career to return to her religious community in Saskatchewan and marry Frank, a gypsy-wild farmer devoid of Christian faith. The plotline follows the couple’s tribulations and triumphs as they struggle to form a lasting bond despite differences in spiritual beliefs and personal expectations. Schemenauer has done her research; the novel’s setting rings true to anyone raised on a farm or listening to grandparents’ stories of prairie life. Descriptions of a blizzard, references to cow milking, and instructions on how to climb through a barbed-wire fence invite the reader to share in the agricultural realities of a passing era. Adding to the story’s realism is Schemenauer’s obvious acquaintance with the ethnic practices and attitudes of western Canadian Mennonites. Many of her allusions to country life hold added meaning when she applies religious commentary; for example, Frank feels Tina’s faith is “a guide rope for their lives together” (an allusion to the means used for crossing a barnyard in a snowstorm), and coyotes howling at night sound to Tina like “‘lost souls.’ Sometimes she felt like a lost soul herself.” This connection between spiritual life and rural conditions becomes particularly poignant (and delightfully bone chilling) in a scene in which a mother’s obsessive love keeps her returning to the corpse of her child stored for the winter in an icehouse—the daughter, she testifies, being “in heaven, safe with Jesus.” Even this grisly picture promotes the historical plausibility of the plot and the way religion plays into the characters’ everyday lives.

The mood of the novel is established by both its themes and the authorial voice. That is, Schemenauer introduces some big issues (such as the role of women; tenets of theology; the characteristics of honesty, trust, and fidelity within relationships), and she does so in tones that fit each of the characters struggling to understand and apply faith to their individual situations. For example, with marriage as the key topic, romance throughout the story takes on differing expressions. Dorrie is a flirt hungry for love because her father “messed with her,” and her subsequent view of church worship is shallow. Tina dithers over whom to marry, rejecting upright but “boring as turnips” Roland in favour of exciting but spiritually ambivalent Frank, whom she at first thinks “just need[s] a good woman to settle him down” but whose love she’s “never been sure of.” For his part, unregenerate Frank, rejecting the Mennonite fellowship he believes has first rejected him, seems motivated largely by his sexual appetites, described in somewhat graphic terms (on the couch he shifts “to hide his rising passion” and slumps back, “throbbing with frustration”).

But the author’s earthy innuendo is juxtaposed against her more prevalent and folksy imagery, which lends a fresh naïveté to the overall tone of the novel. Schemenauer writes in a clean style, without typos or grammatical glitches or historical bloopers to break the reader out of the narrative. Her facility in diction and vocabulary, and her excellent syntax and consistency of style allow the reader to stay in the fictional dream she creates. Her overuse of simile, however, can be distracting: Tina “felt like liverwurst in a sandwich,” hair drooped from her cap “like trickles of molasses,” and her face was “as pale as cottage cheese”; her father was “snoring like a threshing machine,” and “Frank’s laugh was as sharp as a Russian thistle.” That said, many of the word pictures function as reminders of ethnic foods and domestic life, immersing the reader more fully into the rural Mennonite experience.

A main message in Consider the Sunflowers is that life is not easy, not simple—especially in matters of the heart—and that the hard work of living and loving will produce its own reward, with submission to God only easing (not erasing) the pain. Schemenauer shows us that both marriage and faith are susceptible to a person’s decisions and attitudes, often rooted in upbringing. For example, Frank’s wandering ways are blamed on parental desertion: “ ‘Frank’s a wind chaser like his mother. It’s in his blood. He can’t help it.’ ” Again, Tina’s emotional dalliance with an old boyfriend, sparked by her husband’s shortcomings and her own bitterness, manipulation, and dishonesty, blinds her to Frank’s good character traits and to God’s provisions; at one point she feels she might “reel off into some howling void” when, in a state of guilt, she holds a punitive view of faith, unable to “shake the feeling that God, or somebody a lot like him, [is] always just around the corner, keeping score.”

In some ways this novel is a cautionary tale: the reader is advised to take care in choosing a spouse and to be ready to sacrifice, for no one is perfect. Consider the Sunflowers is a credible rendition of the tenuousness of marriage and the nature of romance (and even lust) as it matures into committed love, with inherent warnings about the wisdom necessary in selecting a mate, the selflessness needed to weather the trials of relationships, the inevitability of disappointment, and the hope of redemption through trusting Jesus Christ.

— Deb Elkink is author of an award-winning novel The Third Grace and of a literary analysis on the fiction of G.K. Chesterton. She has a Master’s degree in Historical Theology [Briercrest Seminary 2001].)

2 Responses to “Considering Consider the Sunflowers”