Close encounters of the oops kind, and other stories 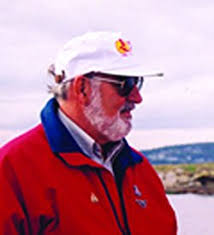 Vassilopoulos was born in Cape Town, South Africa in 1940. An avid boater and scuba diver, he came to B.C. in 1973 and began a series of articles for Pacific Yachting magazine. He wrote a series of feature articles on classic yachts and produced a book, Antiques Afloat on the old vessels and shipbuilding in B.C. from 1920 to 1940, which he published through one of his companies at the time (Panorama Publications, 1981). Based in downtown Vancouver in 1974, and then in Tsawwassen since 1985, he published Diver Magazine, a national publication, from 1974 to 2004 when he sold the company. He continued as a regular contributor to Pacific Yachting, specializing in motor yacht reviews. During the final four years of owning Diver Magazine he produced a quarterly marine recreational newspaper called Boating Express, since shelved.

Vassilopoulos began producing marine guides for boaters in 1994 and has written and published six guides to 2018. He continues to update marina information in his books with the assistance of his wife, Carla.