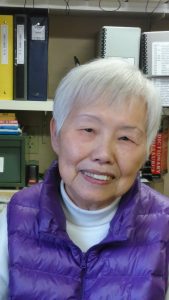 When award-winning author, historian and multicultural champion Lily Chow announced she would be retiring from the New Pathways to Gold Society (NPTGS) Board of Directors this fall, her friends decided to throw the book at her.

And that was just one of the ways Chow’s friends and colleagues showed their appreciation at a celebration held in Ashcroft on October 21, 2020. NPTGS Directors, friends and representatives from some of the many groups Chow has worked with over the decades gathered at The Hub to share stories of her tremendous dedication to heritage and social justice.

That included compiling “The Book On Lily Chow,” a memory book full of pictures and reminiscences featuring Chow’s time as NPTGS Multicultural Director from 2007 to 2020. The cover for the book was hand-made by Ashcroft artist Daniel Colette.

NPTGS Co-Chair Terry Raymond said nice as the book is, it just can’t contain all the great memories he has of working with Chow.

“Lily is one of a kind; a very special person,” said Raymond.

“She has been a tower of strength on the NPTGS Board and her commitment to shining a light on the Chinese experience in B.C. and creating a broader narrative of our shared history has made us all richer as citizens in this province.”

Chow’s admirers went even further by awarding her a book prize in her own name. She’s the inaugural winner of the “Lily Chow Cedar-Bamboo Heritage Award,” which will be given annually to a writer who exemplifies her spirit of multiculturalism, inclusivity and excellence. The award includes $1,000 in prize money.

“We chose cedar-bamboo because Lily has done so much work documenting the special connection between the early Chinese arrivals and the Indigenous Peoples of B.C., especially in the Hope to Barkerville corridor,” said Indigenous Co-Chair Cheryl Chapman.

“No one has done more to chronicle the spirit of cooperation and mutual support between these two peoples; one that continues to this day.” 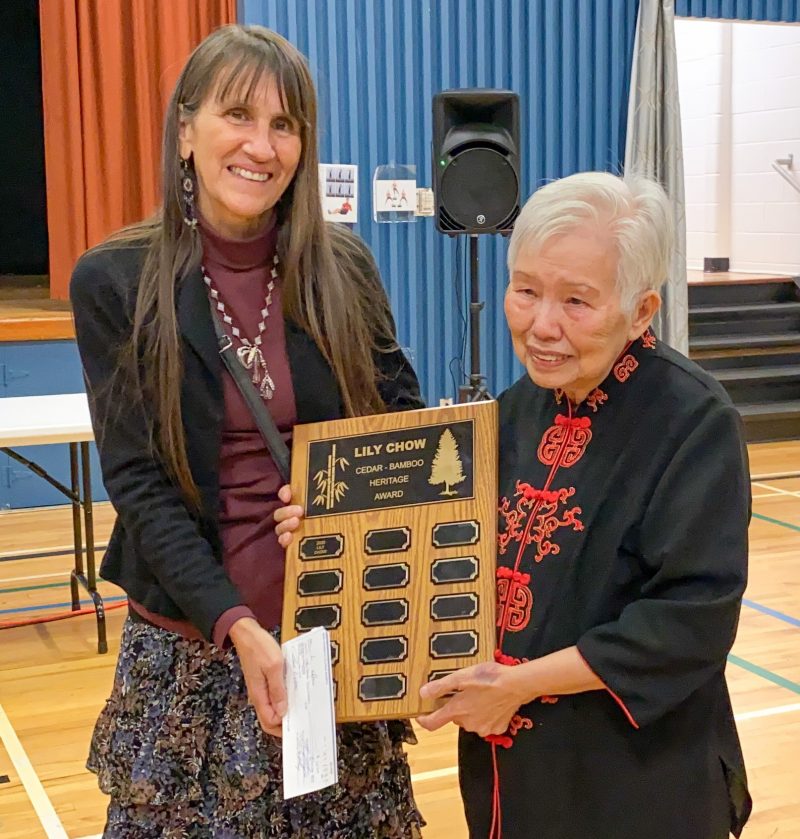 The book award is the brainchild of consultant Mike McDonald, who has worked with Chow for years and shares her passion for the history of the Fraser Canyon and the rest of the Hope to Barkerville corridor. They also both share an enthusiasm for the future of the corridor and the progress of Indigenous reconciliation among its communities.

“Lily Chow has provided a great service to British Columbians by telling the untold stories of Chinese settlers along the gold trails and rails of British Columbia,” said McDonald.

“Alongside indigenous histories that are gaining much-needed attention, stories like Blossoms in the Gold Mountains and Sojourners in the North add to our collective understanding of who we are as British Columbians. We can’t know ourselves without understanding the diversity and lived experiences of those who came before us.”

Chow, who lives in Victoria, is an outstanding academic, historian and author. An award-winning writer, her books include Sojourners in the North, Chasing Their Dream and Blossoms in the Gold Mountains. She’s taught in the Prince George School District and at the University of Northern British Columbia. Chow has received the Queen’s diamond jubilee medal twice.

A tireless advocate for human rights and social justice, Chow was a member of the Legacy Initiatives Advisory Council that sought redress for the injustices done to the Chinese community in our province. She is a founding member of the NPTGS Board of Directors and was the Society’s designated Multicultural Director.

NPTGS is a non-profit organization committed to developing local economies in the Hope to Barkerville corridor through heritage tourism development, First Nations reconciliation and Multiculturalism. For more information, please visit the NPTGS website.