Ormsby #110 Bill Reid is next to Emily 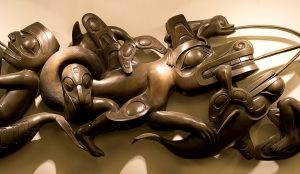 (In collaboration with the Bill Reid Centre). Reproductions of his sculptures circulate on the Canadian $20 bill. He left a mark as an author as well as an artist, writing essays and collaborating with co-authors of diverse specializations. A well-illustrated biography by Doris Shadbolt was published the year of his death. Other print and film resources explore his art. Today, Bill Reid enthusiasts command quick access to information and images online: a Google search for Bill Reid Haida artist produces over 120 relevant results.