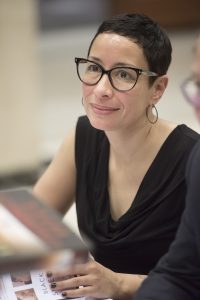 Chantal Gibson’s debut book of poetry, How She Read (Caitlin $20), has won the Pat Lowther Memorial Award presented annually, since 1981, to honour Vancouver poet Pat Lowther whose career was cut short by her untimely death in 1975 when she was killed by her husband who resented her success. Presented to a female poet, the award carries a $2000 prize and is sponsored by the League of Canadian Poets. Gibson’s collection represents the voices of Black women, past and present, highlighting the colonial ideas embedded in everyday things such as storybooks, coloured pencils, paintings and postage stamps. It has also been shortlisted for the 2020 Griffin Poetry Prize; for the Gerald Lampert Memorial Award (which recognizes a first book of poetry published by a Canadian writer); and the Raymond Souster Award (presented annually for a book of poetry by a Canadian League of Poets member). Gibson is an artist-educator living in Vancouver with ancestral roots in Nova Scotia. She teaches writing and visual communication in the School of Interactive Arts & Technology at Simon Fraser University. Her work has been published in Room magazine and Making Room: 40 years of Room Magazine (Caitlin Press, 2017), and she was shortlisted for PRISM magazine’s 2017 Poetry Prize. 978-19879-1596-9

Pat Lowther was born Patricia Louise Tinmuth in 1935. She grew up in North Vancouver in a working class environment and left school at 16. At 18 she married Bill Domphousse, a fellow worker at the North Vancouver Shipbuilding Company. They had two children and were divorced. In 1963 she married Roy Armstrong Lowther, a public school teacher, an aspiring writer and a left-wing political activist. He was eventually dismissed due to his radical politics. Encouraged by other writers such as Pat Lane and Dorothy Livesay, Pat Lowther published her first collection of poems in 1968. Six years and two more books later, she was teaching at UBC and had been elected co-chair of the Canadian League of Poets. One prominent critic declared, “she was on the edge of whatever fame and success Canadian poetry had to offer.”

On October 15, 1975, the badly decomposed body of Pat Lowther’s was found on the beach at Furry Creek, just off the Sea-to-Sky Highway. Police discovered 117 bloodspots on the walls of the couple’s bedroom. Crown prosecutor John Hall successfully argued that Roy Lowther, also a poet, was jealous of his wife’s success and angered by an extra-marital liaison. He killed her with blows from a hammer. The hammer in question and the couple’s mattress were taken by Roy Lowther to Mayne Island, where the mattress had been washed on both sides. Reddish stains remained. He suggested they could be menstrual blood. Roy Lowther was convicted of the crime.

Seymour Mayne published Pat Lowther’s first book, This Difficult Flowring (1968), when he was Managing Editor of Very Stone House, assisted by Patrick Lane. Allan Safarik published her The Age of the Bird (1972).

Before Pat Lowther became a much-lauded poet, she used to enjoy bringing her family to Prospect Point. Prospect Point is where her ashes were released.

A Water Clock. Printed by Morriss Printing on the occasion of a reading for The Pat Lowther Benefit Endowment Fund, held in Vancouver on April 25, 1985 by The League of Canadian Poets. 126 copies printed.