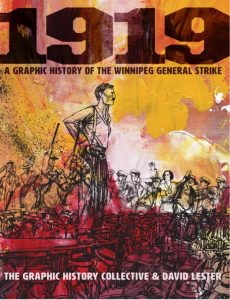 It was once the most famous labour strike in Canadian history. Now few Canadians know much about it: In May of 1919, more than 30,000 workers walked off the job in Winnipeg, Manitoba to fight for higher wages, collective bargaining rights, and more power for working people. The strikers battled police, vigilantes and the government. Along the way they made international headlines. The story is now graphically retold in 1919: A Graphic History of the Winnipeg Strike. (Between the Lines $19.95). Do the math and you’ll see it was 100 years ago. The author of this graphic novel is known as The Graphic History Collective, a group of activists, artists, writers and researchers who are passionate about comics, history and social change. The illustrator is David Lester, known internationally as the guitarist for the venerable underground rock duo Mecca Normal—who has designed B.C. BookWorld for thirty-one years.

The motto of The Graphic History Collective is “forty years without bosses.” Their comic book-style history revisits the strike to introduce new generations to its many lessons, including the power of class struggle and solidarity and the brutal tactics that governments and bosses use to crush workers’ movements. “The Winnipeg General Strike is a stark reminder that the working class and the employing class have nothing in common, and the state is not afraid to bloody its hands to protect the interests of capital. In response, working people must rely on each other and work together to create a new, more just world in the shell of the old.”