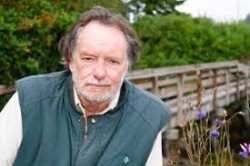 After retiring as professor of marine botany at Simon Fraser University for thirty years, Louis Druehl turned his hand to writing books. He recently penned a novel set in a small community on the west coast of Vancouver Island. Cedar, Salmon and Weed (Granville Island Publishing 2015) is about a young man named Gaz in the 1970s and his friendships with a mix of fishermen, hippies, First Nations and the scientists and students at a local marine station. Gaz leaves his job as a beachcomber to become a small-time marijuana grower. The book captures coastal life and the imperfect world of people in a remote village where residents still get about by boardwalk or boat. A previous book by Druehl, Pacific Seaweeds (Harbour Publishing 2001), is a guide to over 100 common species of seaweeds in the Pacific Northwest, ranging from the coastline of southeast Alaska to central California. Druehl is also the president of Canadian Kelp Resources Ltd., a company that produces sea vegetables (Barkley Sound Kelp) and operates a kelp farm. 978-1926991610 $22.95