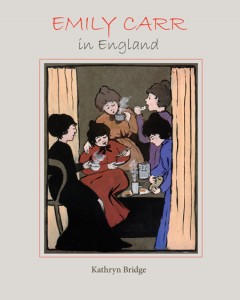 Emily Carr in England (RBCM 2014) by Kathryn Bridge is an important contribution to writing about B.C.’s best-known painter, examining Carr’s five years in England from 1899 (at age 27) to 1904. With historical photos and Carr’s own sketches from the period, it includes some of Carr’s comical stories about her life. One makes fun of the guest house where she lived; another describes an unsuccessful attempt to see Queen Victoria’s funeral procession, and a third describes a painting excursion into woods from St. Ives, Cornwall. While at the Westminster School of Art she was keen to participate in a segregated class for female artists drawing from the nude. “I had never been taught to think of our naked bodies as something beautiful,” she wrote, “only as something indecent, something to be hidden… [The model’s] beauty delighted the artist in us. The illuminated glow of her flesh made sacred the busy hush as we worked.”