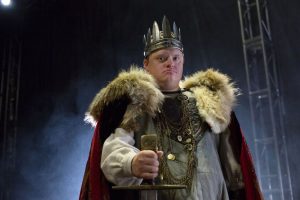 It’s not quite Stravinsky’s The Rite of Spring. Or Judy Chicago’s The Dinner Party. But there is an audaciousness to Neworld Theatre’s production of King Arthur’s Night that made it perfect fare for the recent PuSh Festival, an annual showcase for theatre and dance that pushes the proverbial envelope.

Now the musical play is being published as King Arthur’s Night and Peter Panties: A Collaboration across Perceptions of Cognitive Difference by Talonbooks, the pathfinding imprint for Canadian plays dating all the way back to Michel Tremblay’s early work and George Ryga’s The Ecstasy of Rita Joe.

People are curious to see this show because four of the ten actors have Down syndrome, including the title character portrayed by Niall McNeil, who is also the main playwright. Delightfully played with an endearing shyness by Tiffany King, his queen Guinevere doesn’t remember her lines well, if at all, but she’s one of the show’s strengths. 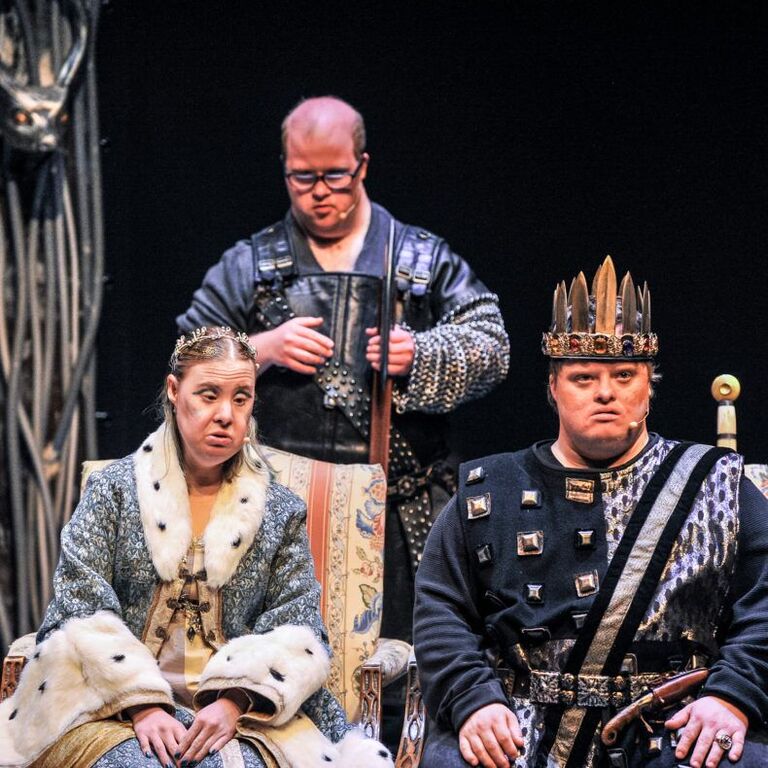 Tiffany King as Guinevere is one of the effective performers.

Niall McNeil is similarly challenged. But more problematic can be his temperamental resistance to prompts from his on-stage coach, Merlin, who is depicted by co-writer/producer Marcus Youssef. McNeil’s galvanizing and portly stature as an all-powerful king can dissipate with pique if those two male egos clash. Youssef is frequently forced to feign obsequiousness to bow to the king’s demands, but who’s really in control?

Imperfections and sudden detours make for the most memorable moments. King Arthur frequently mentions Richard Gere. Guinevere might mention the movie Titanic. When there’s sexual innuendo, someone might add an impromptu “Get a room!”

The subsidiary characters in Camelot are professional actors on stage to shadow the faltering performances, feeding them lines and improvising in order to keep the show on track.

And so, this show swerves and veers and hiccups its way along; different every night.

There are just two plot points. King Arthur has slept with his sister Morgana and now she wants her son Mordred to get the Holy Grail and claim the crown from his father. Meanwhile Lancelot and Guinevere have a platonic love affair that rankles the king.

Prior to a puzzling battle and the production’s belaboured completion, there’s a completely charming comic turn by Andrew Gordon as a soldier slowly twirling his axe in synch with gifted drumming from professional musician Skye Brooks. Their unpredictable interplay is almost vaudevillian, giving rise to heartfelt audience applause. 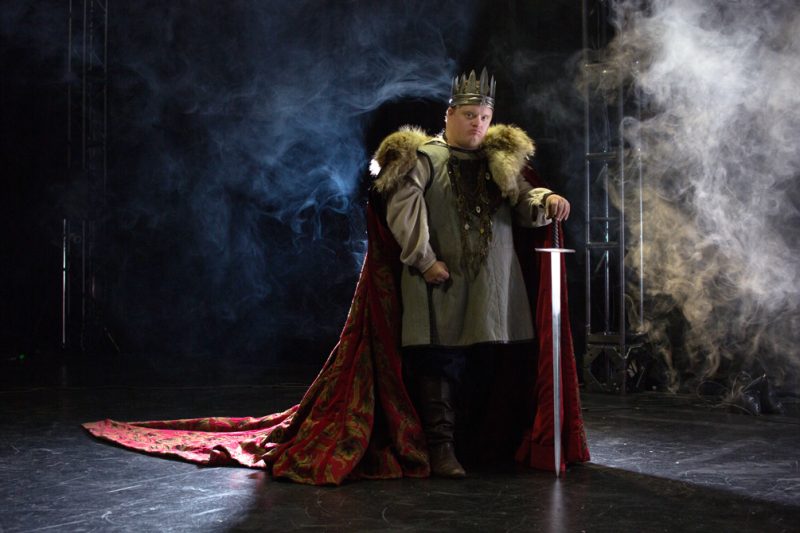 Onstage throughout, with only her drummer for company, keyboardist and composer Veda Hille provides a sensitive soundscape that is essential to the wholesomeness of this undertaking. Arguably the addition of a choir for the PuSh production was unnecessary because the audience can’t grasp McNeil’s incomprehensible lyrics.

If you are a “neurotypical” who is keen on coherence, this play is downright goofy and you’ll want to leave half way through. But if you have a heart that enjoys compassion, the audaciousness of King Arthur’s Night confounding camaraderie can be thrilling.

So, is this art or is this social work? To each his own. If you are someone who wants to navigate new pathways for empathy, and you are seeking the deep pleasure of recognizing the dignity and strength that resides in people who are too often invisibilized, King Arthur’s Night is a winner.

It’s not implausible to imagine Canada Council could now proceed to invent a whole new category for Special Needs Theatre.

One patron who left the show furious drew a parallel to the Special Olympics. They’re held ever four years and who really wants to watch?

But neurotypicals might watch the Special Olympics if Usain Bolt was included, passing the baton in a relay to sprinters with Down syndrome.

It is the collaborative aspect of Neworld’s production that makes it uplifting and sometimes fascinating. Arguably, a documentary film about putting this production together would be as moving as the actual show.

Inspired by the production process for this play, Order of Canada recipient Al Etmanski, a long-time crusader on behalf of people with Down syndrome, including his daughter, has provided a foreword to the published play in which he imagines a better world—a Neworld—for those who are described as developmentally disabled, “In this new world, people don’t look through you. Instead they see you. They see you for your abilities and contributions. What an elusive desire that has been for me as a parent: that my daughter might be seen, not seen through. What an elusive experience that has been for people with disabilities. Or anyone who has been marginalized, categorized, and labeled, for that matter.

“To be seen is to exist: to be recognized for your humanity and personhood, to have presence and potential, to be an equal in a relationship and not merely the client of a social worker; to be a subject, not an object.”

For those who are not seeking Shakespeare or Lord of the Rings, the words spoken in King Arthur’s Night are a subtext for a deeper level of communication.

King Arthur’s Night is not just therapeutic for four actors and a launch pad for the playwright; it’s the antidote to Etmanski’s frank and chilling contention that “to be an object of pity, servitude, or derision is a horrible existence.”

King Arthur’s Night is an eye-opener.

The other play written by Niall McNeil and Marcus Youssef, Peter Panties, is a radical re-imagining of the Peter Pan story in which Peter Pan and Captain Hook (or is he Macbeth?) drink lattes, the Lost Boys hang with detectives from CSI, and Peter desperately wants to have sex with Wendy and make a baby. Sexual exclusion and the denial of full adulthood are no laughing matters for people whose lives include Down syndrome, but McNeil’s “riffing” style of writing is not without humour.