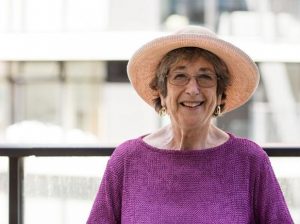 Bonnie Sherr Klein (right, photo courtesy of NFB) was born in Philadelphia on April 1, 1941 and immigrated to Canada with her husband in 1967 in opposition to the Viet Nam War. She has since made more than 25 films, the best-known of which, for the National Film Board, is Not a Love Story, A Film About Pornography, 1981.

Now an Officer of the Order of Canada, the award-winning documentary filmmaker, writer, and anti-war & climate change activist suffered a catastrophic brainstem stroke in 1987. It happened on a summer day when Klein and her husband Michael were enjoying a few days alone at their cabin. After a day outside, Klein became weak and nauseous. She began to stagger and slur her speech and her husband, a physician, rushed her to the hospital in Montreal. Two weeks later, she suffered a second, nearly fatal stroke. Klein was 46 at the time.

She spent seven months in the hospital and three years in rehabilitation. Eventually, Klein learned to get around with two canes or a motorized scooter. She moved to British Columbia in 1993 and subsequently co-wrote a memoir, Slow Dance: A Story of Strokes, Love and Discovery (Knopf) with Persimmon Blackbridge, for which they received the 1998 VanCity Women’s Book Prize. 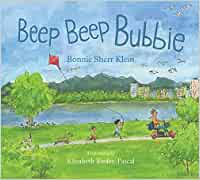 She has since co-founded KickstART Society for Disability Arts and Culture, made the film Shameless: The ART of Disability (2006) and published a newly re-issued children’s book, Beep, Beep Bubbie (Tradewind $19.95) in which a little girl, Kate is upset when her grandma (Bubbie) gets a motorized scooter. Kate slowly warms to the scooter after she sees what a good friend it is to her grandma. Shopping at Granville Island Market with Bubbie on her scooter turns out to be fun and Kate’s little brother Nate loves the scooter’s bells and whistles. Illustrations are by Elisabeth Etudes-Pascal.

Klein now moves through the world on a motorized scooter named Gladys. She–not Gladys–is the mother of Naomi Klein, author of the international bestseller No Logo: Taking Aim at the Brand Bullies, and other books. 9781926890234