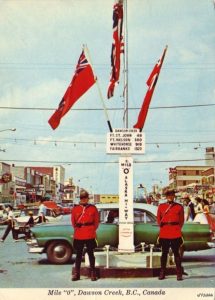 Lily Gontard and Mark Kelly’s highway odyssey of words and photographs has been honoured with a gold medal in the 2017 Foreword Awards for their book Beyond Mile Zero: The Vanishing Alaska Highway Lodge Community (Harbour, $24.95).

Foreword Reviews, a book review journal focusing on independently published books, announced the winners of its INDIES Book of the Year Awards on June 15. The INDIES recognize the best books published in 2017 from small, indie, and university presses, as well as self-published authors. You can view all of the winners at:

The book documents the beginning of the golden age of the automobile. Silvertip, Swift River, Silver Dollar, Krak-R-Krik, Chickaloon and other quaint and quirky establishments sprang up along the highway, offering travellers coffee, gas, conversation and a place to spend the night. During the roadhouse heyday, owners and employees lived on the frontier and earned good wages. Some were looking for a life-long commitment and a place to raise a family, others relished the isolation. Aside from truckers, today most people travel the Alaska Highway in fuel-efficient cars and self-sufficient RVs—the demand for lodge services has diminished and the businesses struggle to survive.

2017 marks the seventy-fifth anniversary of the construction of the Alaska Highway through British Columbia, the Yukon, and Alaska. Throughout the course of the highway’s history, dozens of books have been written about its construction but few have gone any further. This is where Lily Gontard’s Beyond Mile Zero: The Vanishing Alaska Highway Lodge Community excels. Gontard looks beyond the highway’s initial construction to the lodges that developed along the road to serve travellers, truckers, and local industries. Ollie and Helen Wirth ran Burwash Landing Resort i the Yukon for 31 years until its closure in 2013. Mark Kelly photo.